Assemblyman says he received cash from Kawai before wife’s campaign 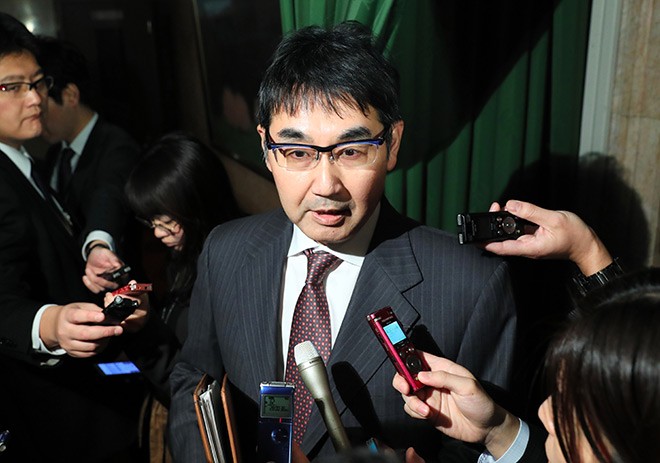 HIROSHIMA--A municipal assemblyman here said he received hundreds of thousands of yen from former Justice Minister Katsuyuki Kawai last year before his wife’s election campaign, which is now the subject of a widening investigation.

The Hiroshima assemblyman also told The Asahi Shimbun that he submitted himself to voluntary questioning by prosecutors, who suspect that vote-buying was involved in the campaign of Anri Kawai, who won her first Diet seat in the July 21 Upper House election.

The assemblyman, a member of the Liberal Democratic Party, said Katsuyuki visited his home by himself in or around May or June after Anri announced her candidacy and before official campaigning started on July 4.

The assemblyman said Katsuyuki handed him an envelope containing hundreds of thousands of yen in cash and nothing else.

He added that Katsuyuki, a Lower House member of the ruling LDP, made no reference to his wife’s campaign in the Upper House election at that time.

Aides to Anri, also an LDP member, and Katsuyuki have been indicted on charges of vote-buying by exceeding the legal limit on payments to Anri’s campaign staff members.

The Hiroshima District Public Prosecutors Office appears to be widening its investigation into the scandal with a focus on whether Katsuyuki was involved.

Several members of the Hiroshima prefectural and municipal assemblies, as well as a senior official with Katsuyuki’s support group, told The Asahi Shimbun that they have been questioned on a voluntary basis by investigators.

They said prosecutors were looking into whether Katsuyuki met them with the intention of asking them to round up votes for his wife, whether cash changed hands and what was the purpose of their meetings.

Some of them said investigators seized their smartphones apparently to scrutinize records of their communications with Katsuyuki.

Hiroshi Tatemichi, an official aide to Anri, and Shinsuke Takaya, a policy aide to Katsuyuki, were indicted on charges of giving bribes to voters in the Upper House election in violation of the Public Offices Election Law.

In a separate interview with The Asahi Shimbun, a senior official of Katsuyuki’s support group said that during voluntary questioning, investigators showed him two receipts bearing his name that were issued by Anri’s office. The receipts suggested that he received a total of 100,000 yen ($929).

He denied receiving the money in the interview with The Asahi Shimbun.

The Public Offices Election Law forbids candidates and their campaign managers to give cash or goods to people in their jurisdiction with the intention of gaining votes because it amounts to giving bribes.

But under the Political Fund Control Law, receipts for such money exchanges must be issued, and both organizations are required to list the money in their income and expenditure reports.