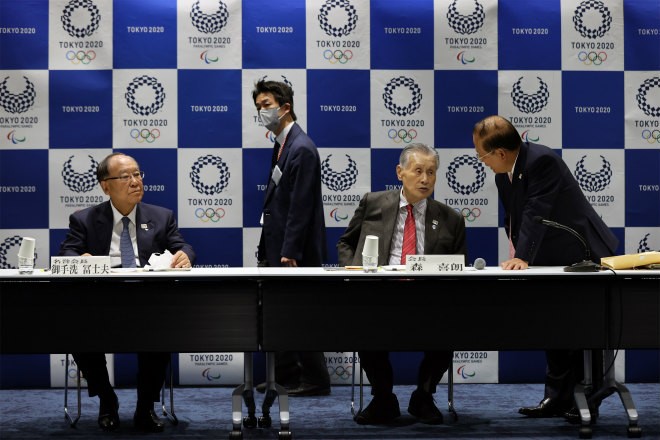 Japanese Olympic organizers got their wish granted with the new schedule for the delayed Tokyo Games. But their relief will likely be short-lived when they try to figure out who will cover the enormous extra costs caused by the postponement.

There also remains the question of whether the novel coronavirus pandemic, the reason for the delay of the 2020 Olympics, will have abated by next summer and pose no threat to the health of the athletes and spectators.

The International Olympic Committee and the Tokyo Olympic organizing committee on March 30 agreed to hold the Summer Games between July 23 and Aug. 8, 2021, and the Paralympics between Aug. 24 and Sept. 5, 2021.

“The Olympics will be held in the summer (next year) in response to the Japanese side’s proposal,” Yoshiro Mori, president of the organizing committee, said at a news conference later that day.

Some officials with the IOC and sports federations expressed a preference to reschedule the Olympics to spring next year to avoid Tokyo’s punishing summer heat.

But Japanese officials pushed for the summer, saying it would give them more time to adequately prepare for the event.

In addition, major sports federations have insisted on holding the Games in summer, citing the difficulty of rescheduling their competitions.

“We are off to a good start,” a senior official of the Japanese organizing committee said after the new schedule was announced, about a week after the Games were postponed.

The logistics of reorganizing the world’s biggest sporting event, which was originally scheduled to start on July 24, will be daunting.

The Tokyo Olympics will feature 339 events in a record 33 sports, bringing more than 10,000 athletes to the Japanese capital.

More than 10 million people are expected to visit Tokyo during the Games, including spectators and officials related to the Olympics.

Japan’s organizing committee, which was set up in January 2014, has held repeated negotiations with businesses to secure in excess of 100 competition and training venues, more than 40,000 hotel rooms and 2,000 chartered buses.

In its talks with the IOC, the Japanese side also requested, and received, a Friday start to the rescheduled Games.

Japanese officials asked that the event will not fall on important dates in Japan, such as July 22, when the terms of Tokyo metropolitan assembly members will be up, and on Aug. 15, the anniversary of the end of World War II in Japan.

NBCUniversal, the Olympics broadcaster in the United States, reportedly wanted the event to be held in summer. The broadcaster has quite a bit of sway, considering the bulk of the IOC’s revenues comes from broadcasting rights fees.

But the rescheduled event will require additional costs, raising the inevitable question over who will share the burden and by how much.

Officials with the organizing committee estimated those extra costs in the hundreds of billions of yen.

Before the rescheduled date was announced, Tokyo Governor Yuriko Koike expressed her hopes that the IOC would pick up the tab for part of the additional expenses.

“It is also important for the IOC that the Games will be held despite the delay,” she said at a news conference at the Tokyo metropolitan government building on March 27.

Her comment echoed growing calls from metropolitan officials that the IOC and the Japanese government should both shell out for the extra costs generated by the postponement.

Based on Tokyo’s bid to host the Olympics, the metropolitan government is primarily obliged to cover any shortage of funds produced by the organizing committee.

However, staging the Olympics is effectively a national project because many politicians and businesses expect the event to help shore up the Japanese economy.

Tokyo, Japan’s economic center, is expected to suffer enormous losses from the spread of the new coronavirus.

A senior official with the metropolitan government predicted Tokyo would see a drop of 1 trillion yen ($9.34 billion) to 2 trillion yen in tax revenues because of the pandemic.

But the official added that Japan may only be able to ask the IOC to cover a portion of the additional costs, given the IOC’s reluctance to pay for the extra expenses when it decided to move the marathon and race-walking events to the northern city of Sapporo.

The Japanese government is also hesitant to pick up the tab.

And then there is the question of whether the coronavirus pandemic will be under control by next summer.

“It is possible that the Games will be delayed again after officials see how it goes,” Haruyuki Takahashi, an executive board member of the organizing committee, told reporters on March 30.

Takahashi, a former executive at Dentsu Inc., Japan’s largest advertising agency, had advocated a “postponement of two years” for the Summer Games.

But a senior official with an international sports federation disagreed with his view.

“I don’t think the Olympics will be postponed again if the event cannot be held in summer next year,” the official said. “It will likely be canceled.”

Noting the uncertainty surrounding the coronavirus pandemic, some sports federations had suggested that the Japanese side consider the possibility of holding the Olympics in autumn next year.

However, Mori was optimistic that the Games will be held in summer 2021.
“For sure, it is like making a wish to a god, but I believe that our wish will be met,” he said.