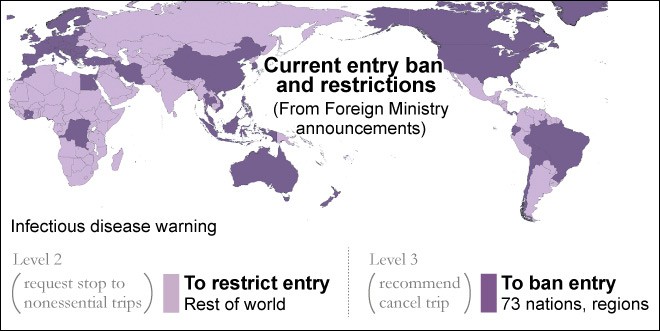 The government drastically expanded its ban on entry from overseas in its latest move to curtail new coronavirus infections. The 73 nations now targeted encompass huge chunks of the world.

On March 31, 49 nations were added to the list for which Japan's infectious disease warning has been raised to Level 3, the second highest in a four-stage scale.

With 24 nations already on the list, the latest measure also recommends that Japanese nationals shun travel to those nations.

The shutdown was triggered by a finding in late March that one in four confirmed coronavirus infections in Japan were individuals who had entered from abroad.

An emergency Cabinet ministers meeting dealing with the emergency situation within the National Security Council is expected to ban entry to all foreign nationals carrying passports of the targeted nations as well as those who have visited them during the past two weeks unless there are exceptional circumstances.

Thousands of Japanese nationals who reside for extended periods in the 73 nations are expected to return to Japan, and they will be required to take a polymerase chain reaction (PCR) test to check for coronavirus infection.

In addition, the government has raised the infectious disease warning for all other nations that had a Level 1 warning, which called on Japanese to think twice about visiting because of the danger of becoming infected, to Level 2, which recommends against any nonessential trips.

The NSC Cabinet ministers meeting is expected to decide on entry restrictions for those nations with the Level 2 warning. That would mean all those entering Japan from those nations would be asked to self-isolate for two weeks and not use public transportation.

The Foreign Ministry issued the first Level 1 infectious diseases warning on Jan. 21 to cover all of China, where the coronavirus epidemic started. The warning was subsequently raised to higher levels, with 23 nations covered by the Level 3 warning.

But the continuing spread of the coronavirus globally led to the latest expansion of the list of nations designated with the Level 3 warning.

While the latest move is designed to prevent the coronavirus from being spread by those who enter from abroad, questions are being raised about whether there will be enough PCR test kits available to handle the thousands of Japanese nationals expected to return.

Returning Japanese will also be asked to self-quarantine at the airport or a facility designated by the head of the local quarantine office until the results of the PCR test are clear.

And even if a negative result emerges, they will be asked to self-quarantine for an additional two weeks at home or a hotel.

But it remains to be seen how effective this measure will be since there have been cases of individuals who did not bother to quarantine themselves while awaiting the PCR result and were later found to be infected.

In addition, the Level 2 warning for the rest of the world means that those entering from those nations, including Japanese nationals, will be asked to self-quarantine for two weeks.

Efforts are now under way to marshal the necessary personnel that will be required to conduct the PCR tests as well as securing facilities to accommodate those who have yet to take the test.

Several hotels had already been secured as potential quarantine facilities, a source said.

There is also a plan to divert international flights to other airports in Japan if testing cannot keep pace with the number of returning Japanese nationals at Narita and Haneda airports.

(This article was written by Narumi Ota and Yuka Takeshita)

(Nations and regions already at Level 3)

Rest of the world