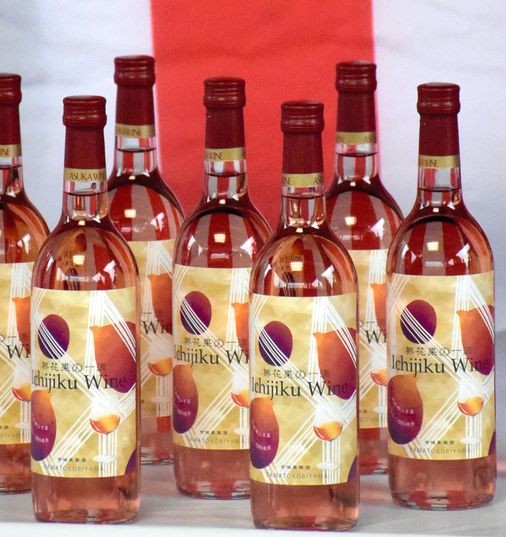 Bottles of fig wine Ichijiku no Itteki developed by local officials are introduced at the Yamato-Koriyama city hall in Nara Prefecture on Feb. 22. (Provided by the city government)

YAMATO-KORIYAMA, Nara Prefecture--Officials here have released a fig wine to promote the fruit as a specialty of the city that is known more for its round eggplants and goldfish.

Ichijiku no Itteki (A drop of fig) is produced by an association founded by officials from the city government, the chamber of commerce and industry, the agricultural cooperative society and other organizations.

According to the city government, figs have been produced here since the Taisho Era (1912-1926).

Currently, about 50 farming households mainly in the Katagiri district cultivate about 450 tons of figs a year on about 23 hectares, accounting for 90 percent of the prefecture’s fig production.

The figs are shipped to the Keihanshin area and elsewhere in summer and autumn.

The officials were considering ways to add value to local products as part of agricultural diversification efforts when they came up with the idea to produce wine from the easily bruised figs.

About a year ago, they asked the Osaka prefectural Research Institute of Environment, Agriculture and Fisheries to make a recipe. In November, they founded a local association for fig wine.

In January, frozen figs weighing about 1 ton were brought to Asuka Wine Corp., a winery in Habikino, Osaka Prefecture, to produce enough fig wine to fill about 1,800 720-milliliter bottles.

The wine, containing about 10 percent alcohol, is characterized by a refreshing sweetness.

The officials commissioned the Kansai Culture and Art High School in Nara to design the wine label.

The city and school have signed a partnership deal to seek ways to solve community problems.

Of the 20 applications filed by students, a design created by then second-year student Misaki Kubo was selected for the product.

“It’s an ideal pre-dinner drink, and we’d really like you to taste it,” Mayor Kiyoshi Ueda, who serves as head of the association, said.

The fig wine is or will be available at about 10 shops mainly in the city. Its production will be limited to the winter season for the time being, the officials added.

A promotional video featuring the production process of the wine is available at (https://www.youtube.com/watch?v=Q-rIv2Ko0Vc).