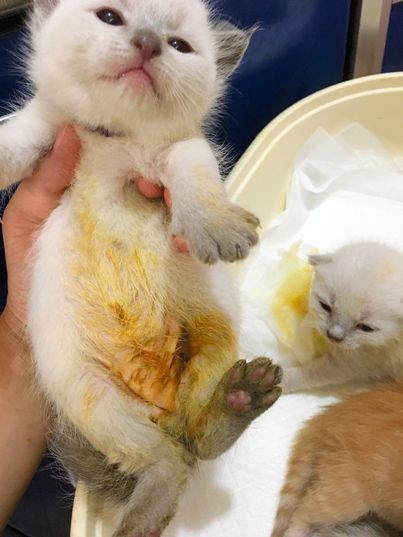 The kitten in this 2018 image was born at a breeding facility in Saitama Prefecture. A former staff member said it was left by the operator to wallow in its mother’s watery excrement and died the day after this photo was taken. (Provided by an animal protection organization)

A shocking survey found that tens of thousands of dogs and cats die annually at pet shops and breeding facilities across Japan due to poor sanitation, neglect and illness.

In fiscal 2018, it emerged that 26,000 puppies and kittens, or 3 percent of all the animals bred and offered for sale, did not survive. The total number of deaths over the past five years exceeded 120,000.

The findings underline an urgent need to improve conditions at pet agencies in light of burgeoning demand for furry companions, experts said.

“There are major concerns that agencies breeding cats and dogs are not giving sufficient consideration to creating the right environment to raise them,” said veterinarian Nai Machiya, a researcher at the Japan Animal Welfare Society.

Breeding agents and pet stores are required by law to regularly report to local authorities about the number of dogs and cats they bred, sold and delivered as well as the number of deaths in the process.

The Asahi Shimbun sent a questionnaire to prefectural governments, major cities with near-prefectural powers and other core municipalities to which those annual reports are submitted.

The study received responses from all those surveyed.

Such reports have been mandatory since an amendment to the animal welfare law was enforced in September 2013. The Asahi Shimbun has been tracking the results since fiscal 2014.

Felines have overtaken canines in recent years as the most popular household pet due partly to the fact that people don't have to take cats for a walk. Some cat species are highly sought-after, Machiya noted.

This explains the 9.7 percent increase year on year in the number of felines offered for sale. The 199,569 cats available for sale in fiscal 2018 marked the fourth consecutive year of annual increase. The figure was 1.5 times higher than the 133,554 for fiscal 2014.

The survey results also showed that 26,249 canines and felines died during the process from breeding to delivery and retailing in fiscal 2018, up 1,778 year on year.

The periodic report is based on documents recording the details of individual pet animals. Those born dead or which died of old age after they were used for breeding purposes are, in principle, not included in the death toll.

This suggests that huge numbers of puppies and kittens intended for sale, as well as adult dogs and cats raised for breeding purposes, die from injury, disease, stress and other factors.

Annual death rates have remained at around 3 percent over the years with no signs of improvement, even as more pooches and cats are offered for sale, often at eye-popping prices.

The Environment Ministry is so concerned about the situation, and aiming to improve conditions of canines and felines kept at breeding and retailing agencies, it set up a dedicated panel to work out standards, including numerical targets, for breeders and retailers.

The panel is expected to come up with draft criteria this spring at the earliest, and a ministerial ordinance based on the new standards is scheduled to take effect in June next year.

(This article was written by Megumi Yada and Masahiko Ota.)