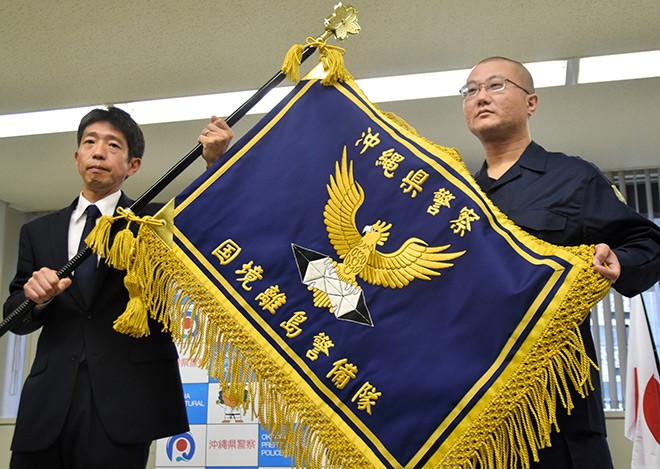 Police officials display the flag for the task force set up on April 1 within the Okinawa prefectural police in Naha primarily to protect the Senkaku Islands in the East China Sea. (Shinichi Fujiwara)

The establishment of the 151-member Border Islands Security Force reflects Japan’s growing concerns about the increase in incursions by Chinese government vessels in waters surrounding the Senkaku Islands, a group of islets in the East China Sea.

The force, set up at the headquarters of the Okinawa prefectural police, is led by an assistant commissioner assigned by the National Police Agency. About 40 members are on loan from Tokyo’s Metropolitan Police Department and other prefectural police departments.

According to sources, several dozen team members can be quickly mobilized in one dispatch to the site of an illegal landing or occupation.

Team members will be armed with automatic weapons and submachineguns. The NPA expects the force to receive a large helicopter that can carry more than 20 people by the end of next March.

Another large helicopter will be provided to the Fukuoka prefectural police to assist the Border Islands Security Force when the need arises.

The agency allocated about 7.1 billion yen ($66.2 million) for the task force in the initial budget for fiscal 2020, which began this month.

The security force has been trained to operate in unfriendly terrain, such as precipitous coastlines and rugged hills.

The team also includes personnel who can provide emergency medical treatment to injured members, a first for any police force in the country.

Okinawa Prefecture is home to the Senkaku Islands, which are also claimed by and known as the Diaoyu Islands in China.

In 2012, Japanese authorities arrested seven Chinese, including activists, after they illegally landed on Uotsurishima, one of the Senkaku Islands.

To get to the Senkaku Islands from Okinawa Prefecture’s main island, a helicopter operated by prefectural police usually must stop at Ishigakijima island for refueling.

The planned large helicopter for the security force will be able to make a round trip between the main Okinawa island and the Senkaku Islands without refueling, the sources said.

After the government bought some of the islands from private ownership in September 2012, the number of incursions by Chinese government vessels surged in Japan’s territorial waters and the Contiguous Zone around the isles.

A record-high 1,097 Chinese government vessels entered the Contiguous Zone over 282 days in 2019.

The same year, 126 Chinese government vessels entered Japanese territorial waters around the islands over 32 days, the second highest total since 2013.

The Coast Guard has deployed 12 vessels in Okinawa Prefecture, including some stationed on Ishigakijima, as a force dedicated to patrols around the Senkaku Islands.