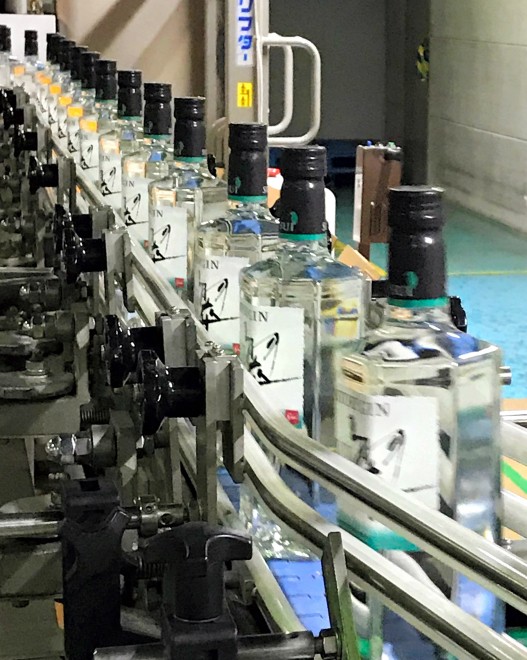 While gin is widely used at bars in cocktails in Japan, sipping the tipple only at counters would not lead to an explosive surge in consumption.

So, domestic beverage makers such as Suntory Spirits Ltd. are seeking to entice more drinkers to enjoy gin within households and casual restaurants by introducing reasonably priced products.

Suntory unveiled its new gin bottle named Sui on March 3 that features “yuzu” citrus, green tea leaves and ginger so its clean taste will pair well with food. The product can be combined with soda for a highball.

“Lemon sour and other fruit-flavored alcoholic drinks are widely accepted in Japan,” said Nobuhiro Torii, vice president of Suntory Holdings Ltd. “I expect that gin may be mixed with, for example, soda and lemon to grow in popularity.”

Buoyed by the growing popularity overseas, exports are brisk of luxury craft gin characterized by carefully selected materials and delicately created flavors are inspiring distillers to try to reimport the boom of Japan-made products.

In 2017, Suntory Spirits released another bottle of domestically distilled gin of the same size called Roku for 4,000 yen.

It gained instant popularity since its unique flavor marked by cherry blossoms and leaves--as well as the “gyokuro” top-quality green tea and “sencha” mid-level green tea--was difficult for overseas makers to reproduce.

The gin’s unit sales increased more than 40 percent year on year in 2019, with more than 90 percent of shipped bottles consumed outside Japan.

As demand for gin is predicted to grow further, Suntory will increase its production capacity at the manufacturing line within its Osaka plant at a cost of 2 billion yen from next year, with an eye toward doubling its current distilling capability by 2022.

The sales of Asahi Breweries Ltd.’s Nikka Coffey Gin, along with a vodka product from the same brand, doubled in 2019 from the previous year.

The Kyoto Distillery exports its bottles to 20 nations, and Chugoku Jozo Co. in Hiroshima Prefecture saw its sales rise more than 10 percent as it started delivering to customers not only in Europe but also in Hong Kong.