Chinese struggle to return to work as virus controls ease 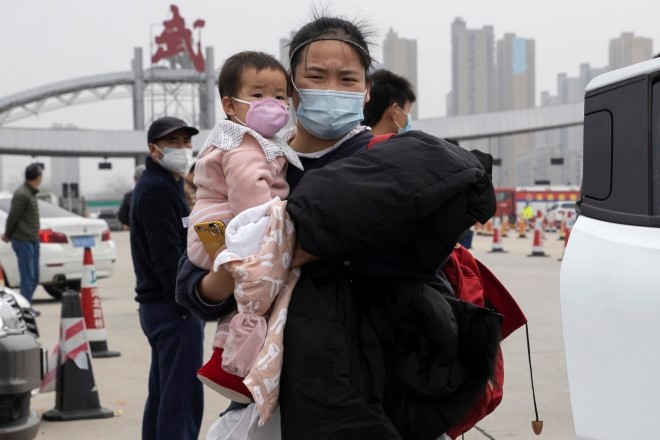 A woman holding a child walks away from the expressway gate at the border of Wuhan city in central China’s Hubei province on April 2. (AP Photo)

WUHAN, China--After two months in locked-down Wuhan, Wei Lei was eager to get back to work on a railway construction site. Instead, the 22-year-old found himself stranded at an expressway toll plaza when police decided who was allowed in and out of the city where the coronavirus pandemic started.

The authorities wanted a letter from his bosses saying he was needed, but Wei said he didn’t have one because employees who would prepare it had yet to return to work.

“It was boring staying at home and I was embarrassed to be fed by my parents,” Wei said Thursday.

Chinese leaders are trying to revive the economy, but local officials under orders to prevent new infections are enforcing disease checks and other controls that add to financial losses and aggravation for millions of workers.

Beijing told companies to keep paying employees and promised loans and other aid. But millions of migrants, day laborers and others without regular jobs need to return to work before they can start getting paid after two idle months.

More than 100 million workers who visited their hometowns for the Lunar New Year holiday were stranded after travel controls imposed Jan. 23 on Wuhan to fight the virus were extended to cover most of China. The holiday was prolonged to keep factories and offices closed and the public at home.

Even after the ruling Communist Party reversed course in early March and started allowing some businesses to reopen, travel curbs remained in place in many areas, keeping workers away from their jobs.

Chinese officials say state-dominated industries such as steel are almost back to normal production. But many private employers--the sector that generates most of China’s jobs and wealth--say they are operating at a fraction of normal levels in part because employees haven’t come back to work.

The People’s Daily newspaper reported March 20 that about 100 million migrant workers, or about 80 percent of those who returned to their hometowns for the holiday, were back at work. No official figures for possible job losses have been reported.

One of the bleakest estimates came from Liu Chenjie, an economic commentator and chairman of Upright Capital, a hedge fund. He said in comments reported by the website Sina.com that as many as 200 million people might have lost jobs or were underemployed due to the virus.

Wuhan, a city of 11 million people in Hubei province, is the industrial and transportation hub of central China.

At the Wuhan East toll plaza where Wei waited, police in gloves and face masks were turning away vehicles without Wuhan plates.

Wearing masks and carrying children, returnees showed a green “health code” on a smartphone app that indicates they are symptom-free. Occupants of cars waiting inside the barrier to pick up returnees were checked for fever by police.

Cai Luo, a saleswoman for an internet company in Wuhan, was returning from her nearby hometown of Huanggang.

“I had to show my green code and be checked at every stop on the way back,” said Cai, 24. “I felt panic because I had never come across before.”

Huanggang also was quarantined but controls there and on other cities were lifted last month.

“We weren’t allowed to walk out of our home, let alone shopping at a supermarket,” Cai said. “They knew I was back from Wuhan so they put stricter grounding on me.”

Cai said she worked from home but her parents couldn’t and had no income.

“It is hard for ordinary families to have no income for two months,” she said.

The final controls on Wuhan, which had three-fourths of China’s virus deaths, last through April 8.

Returnees who were allowed into Wuhan were picked up by their employers or squeezed into private cars. Drivers earned extra cash as informal taxis on a day when many businesses had yet to reopen.

Despite easing controls that shut down most of China’s air, rail and bus service, authorities still require fever checks at public buildings nationwide and try to keep track of where individual travelers go.

Wei said he worked on a construction site in Huangmei county on the boundary between Hubei and neighboring Jiangxi province. He showed a reporter a copy of a letter given to a coworker by their employer bearing the red approval seals of a village committee and local government.

After two hours at the roadblock, Wei said he was “not hopeful” he could get his own approval letter.

“I prepared documents the day before yesterday, but today something changed and the documents didn’t work anymore,” he said. “I have to go back to do it again.”