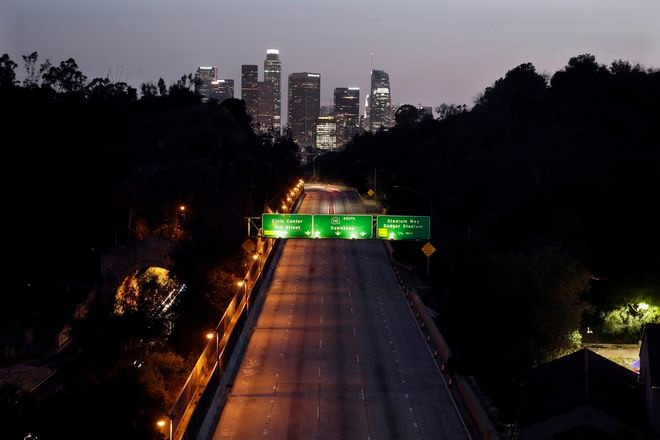 Light traffic is seen on California 110 with the city skyline in the background on April 2 in Los Angeles. California is in its second week of a statewide lockdown, where schools and nonessential businesses are closed and the governor has ordered people to stay home. (AP Photo)

OAKLAND, California--Alphabet Inc.’s Google on Thursday published reports for 131 countries showing whether visits to shops, parks and workplaces dropped in March, when many governments issued stay-at-home orders to rein in the spread of the novel coronavirus.

Google’s analysis of location data from billions of users’ phones is the largest public dataset available to help health authorities assess if people are abiding with shelter-in-place and similar orders issued across the world.

Its reports show charts that compare traffic from Feb. 16 to March 29 at subway, train and bus stations, grocery stores and other broad categories of places with a five-week period earlier this year.

In Italy, one of the countries hardest hit by the virus, visits to retail and recreation locations, including restaurants and movie theaters, plunged 94 percent while visits to workplaces slid 63 percent. Reflecting the severity of the crisis there, grocery and pharmacy visits in Italy dropped 85 percent and park visits were down by 90 percent.

In the United States, California, which was the first to issue a statewide lockdown, cut visits to retail and recreation locations by half. By contrast, Arkansas, one of the few states without a sweeping lockdown, has seen such visits fall 29 percent, the lowest for a U.S. state.

The data also underscore some challenges authorities have faced in keeping people apart. Grocery store visits surged in Singapore, the United Kingdom and elsewhere as travel restrictions were set to go into place. Visits to parks spiked in March in some San Francisco Bay Area counties, forcing them to later put the sites off limits.

By contrast, in Japan where authorities have been relatively relaxed in urging social distancing measures but where calls have been growing daily for a state of emergency, visits to retail and recreational places fell 26 percent. Visits to workplaces dropped a mere 9 percent.

The coronavirus has infected more than 1 million people globally, and COVID-19, the respiratory illness it causes, has killed 52,000, according to a Reuters tally.

Facebook Inc., which like Google has billions of users, has shared location data with nongovernmental researchers that are producing similar reports for authorities in several countries. But the social media giant has not published any findings.

Google, which infers demographics from users’ internet use as well as some data given when signing up to Google services, said it was not reporting demographic information. The company said, though, it was open to including additional information and countries in follow-up reports.

“These reports have been developed to be helpful while adhering to our stringent privacy protocols and policies,” Dr. Karen DeSalvo, chief health officer for Google Health and Jen Fitzpatrick, senior vice president for Google Geo, wrote in a blog post.

Google said it published the reports to avoid any confusion about what it was providing to authorities, given the global debate that has emerged about balancing privacy-invasive tracking with the need to prevent further outbreaks.

China, Singapore, South Korea and other countries have asked residents to use apps and other technology to track their compliance with quarantines, but privacy activists argue such measures can compromise individual liberties.

Data in Google’s reports come from users who enabled Google’s “Location History” feature on their devices. The company said it adopted technical measures to ensure that no individual could be identified through the new reports.

The company declined to comment on whether it has received any legal requests to share more detailed data to help with efforts to tackle the pandemic.