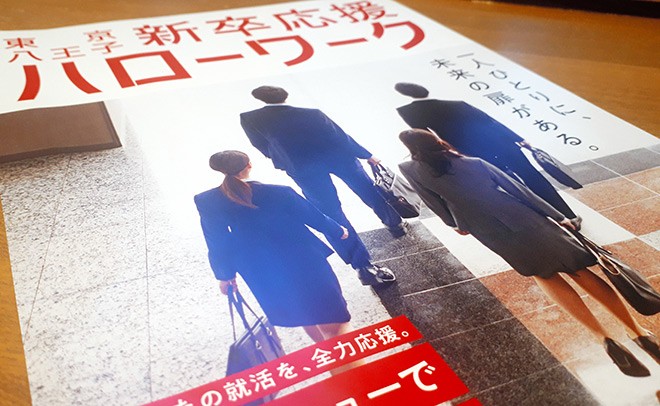 Young people are seeking consultations at public employment service offices after businesses withdrew job offers right before they were to join the companies. (The Asahi Shimbun)

A 22-year-old woman in western Japan was anticipating starting her new job for a foreign-affiliated company in the service industry.

But in late February, a month before her graduation from college, the company emailed the woman to tell her to find a job elsewhere as there was no work for her.

She did not grasp the meaning at first. But after reading it again, she realized the harsh message.

The woman was aware that the service industry has been battered by the fallout from the spread of the new coronavirus.

“But I never imagined that my position would be gone,” she said. “It is really frustrating that it came all of a sudden.”

At that time, she was working on her foreign language skills to prepare for her job starting in April.

The woman was forced to restart her job search with students who are graduating in March 2021. In job applications, she makes sure to add in the remarks column that a previous job offer was rescinded due to the coronavirus outbreak.

The Ministry of Health, Labor and Welfare reported that as of April 2, job offers to 56 new graduates--14 high school graduates and 42 college and other graduates--had been rescinded by 22 businesses.

Of the 56, about 40 new hires were expected to work in the retail, lodging or food service industry. The nonmanufacturing sector has been severely impacted by authorities’ request for shutdowns to slow the spread of the virus.

That trickles down to many new graduates who were supposed to start their jobs in the new fiscal year starting in the spring. Some companies have been forced to cancel job offers due to a sharp drop in business.

The number of new graduates in fiscal 2019 whose job offers were withdrawn by businesses exceeded the number in the previous fiscal year for the first time in three years, according to the ministry.

With their job offers rescinded, these hapless new graduates have been forced to restart their job search in an increasingly deteriorating job market.

The practice of businesses withdrawing employment offers to new graduates occurred in times when the economy took a turn for the worse and in the aftermath of a large-scale natural disaster.

But the number of cancellations has been on the decline in recent years as the Japanese economy got back on a moderate recovery track and needed more manpower to fill the labor void.

There were 35 cancellations of employment offers for those who graduated in fiscal 2018, the lowest since the collapse of Lehman Brothers in autumn 2008.

But the job market landscape has been changing fast since the outbreak of the coronavirus. And many graduates feel compelled to just accept the withdrawal of job offers, rather than speaking out and extolling their rights.

Legal experts say it is a common understanding that a labor contract is concluded when a student submits a document accepting a job offer from an employer.

As a result, they say a company must have a reason that is deemed reasonable and appropriate by social standards when it cancels the offer.

“From the standpoint of the law, it is not easy to retract a job offer,” said Chikara Shimasaki, a lawyer well-versed in labor issues.

He added that businesses withdraw their job offers for new graduates, believing they will not make a fuss over the cancellations.

“Employers should imagine how damaging it is to new graduates,” he said.

The ministry urges businesses to contact the public employment security office when they revoke job offers.

Some reversed their decision and agreed to continue the positions for new graduates after labor authorities explained the provision of expanded government subsidies to retain manpower, according to the ministry.