Steep landing flight over Tokyo a result of talks with U.S. forces

Passenger planes fly at low altitudes over central Tokyo as they approach Haneda Airport for landing on April 3, when two new flight routes were used for the first time. (Takahiro Kumakura) 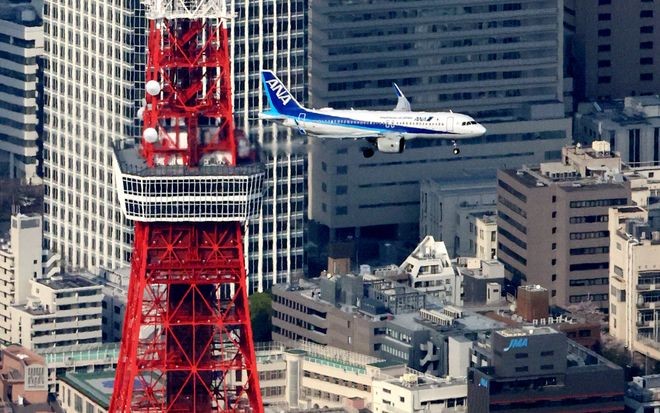 A sharp and risky landing angle of new flight routes over central Tokyo was agreed upon by Japan and the United States because it was convenient for both sides, government sources said.

The Japanese government argues the steep landing plan was adopted to reduce noise pollution, but it has provided no explanation about how that decision was reached in negotiations with U.S. forces.

Talks with the U.S. military were required because one of the two low-altitude routes introduced in April for landings at Haneda Airport enters so-called Yokota airspace controlled by the U.S. military, which wanted to increase its own flights in the airspace.

The western route in question is one of the new courses to land on two parallel airstrips at Haneda Airport. It runs through the Yokota airspace to arrive at Runway A in southerly winds under fine weather conditions.

The Yokota airspace is managed by the U.S. military for efficient operations of the Yokota Air Base in western Tokyo.

Officials from both sides discussed the issue at a subcommittee of the Japan-U.S. Joint Committee and on other occasions.

In January last year, Tokyo and Washington agreed not only on the steeper landing from a higher altitude but also on the Japanese side assuming responsibility for air traffic control of passenger planes in the airspace.

The transport ministry asked Japan Airlines Co. and All Nippon Airways Co. to examine safety of the planned routes. The two airlines carried out simulations and confirmed that no safety threats would emerge.

The government announced the new routes in July last year.

However, some pilots and aviation experts said the acute landing angle will lead to a faster speed and make it “difficult to make a safe landing.”

Behind the agreement is the U.S. forces’ intention to fly as many aircraft as possible in the airspace for training and other purposes, even during the new flight course’s operating hours from 3 p.m. to 7 p.m.

If Japanese airplanes reach Haneda Airport at a sharper angle from a higher altitude, the U.S. military will be able to use the wider space under the route.

A Japanese government insider said the course was “already weighed as a countermeasure against noise pollution and was not determined based only on Washington’s opinion.”

But another government source said the two sides decided to adopt the higher altitude simply because the interests of Tokyo and Washington coincided.

The transport ministry declined to comment on the agreement with U.S. forces.

The space above the Yokota Air Base around Fussa in western Tokyo, the hub facility for transporting military supplies, has been managed by the United States since the immediate postwar period. It covers altitudes from 2,450 meters and below to 7,000 meters and below depending on the locations over 10 prefectures, including Tokyo, Saitama, Kanagawa, Yamanashi and Fukushima.

The Yokota airspace is controlled by the U.S. military under the Status of Forces Agreement (SOFA) and a consensus reached at the Japan-U.S. Joint Committee in accordance with the SOFA.

Although the U.S.-controlled airspace has been shrunk on eight occasions, there are no prospects for the return of its control to Japan. The U.S. side insists that it should hold the air traffic control in the airspace for efficient airfield operations.

Passenger planes taking the western route will enter the Yokota airspace and gradually lower their height from 1,500 meters above the capital’s Nerima Ward and elsewhere before leaving the airspace when they fly over JR Nakano Station.

They must pass through the Final Approach Fix (FAF) set around Nakano Station.

The transport ministry’s initial plan was to set the altitude of the FAF at 1,037 meters. But it increased the height by more than 120 meters to 1,159 meters in late July last year, citing the noise issue.

The landing angle was changed from standard 3.0 degrees to 3.45 degrees, and the new route was officially approved in August. That means passenger aircraft must fly higher than the altitude of 1,159 meters in the Yokota airspace along the western course.

Although the new eastern route does not enter the Yokota airspace, the height was reportedly set at the same 1,159-meter level as part of efforts to reduce noise. Planes on both routes will fly via the Yokota airspace and land at an angle of 3.0 degrees if the weather is bad.