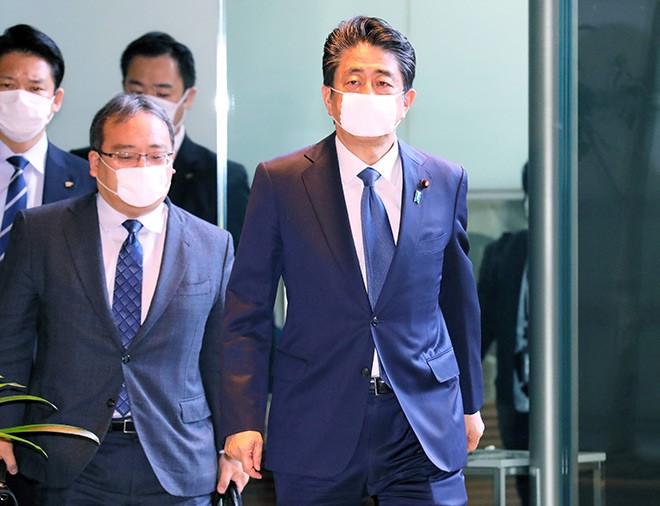 Prime Minister Shinzo Abe said he will declare a state of emergency over the COVID-19 pandemic as early as April 7, targeting Tokyo and other urban areas that are seeing sharp increases in infections.

The government plans to declare a monthlong state of emergency for Tokyo and six prefectures, Abe told a meeting of senior officials of the ruling Liberal Democratic Party on April 6, sources said.

The government’s task force on containing the spread of the novel coronavirus was to meet on the evening of April 6 to formally prepare the declaration.

Abe is expected to consult experts at an advisory meeting the following day and then proclaim a state of emergency for the prefectures, the sources said.

He has informed the Tokyo metropolitan government about the decision, the sources said.

The Diet in March enacted a revised special measures law to give the central government a freer hand in dealing with the outbreak.

A state of emergency can be issued only in a situation where “there is a risk of causing extremely serious damage to the lives and health of the public” and “the disease spreads so rapidly and throughout the nation that it has a tremendous impact on the daily lives of its citizens and economy.”

“It is a highly charged situation because the number of patients keeps increasing with the infection routes unknown,” Yasutoshi Nishimura, the minister in charge of economic revitalization, who is handling the government’s responses to the pandemic, said at a Lower House committee meeting on April 6.

Under the revised law, a state of emergency can be declared by the prime minister as the leader of the government’s task force headquarters. Abe will specify the period of implementation and name the prefectures targeted.

But the governors of the prefectures named have the authority to impose actual measures.

Once a governor concludes that such measures are necessary to prevent the spread of the virus, she or he can take actions that restrict the private rights of residents.

These measures include requesting residents to avoid going out for nonessential purposes, suspending the use of a facility, and asking organizers to cancel events.

A governor can restrict the use of these and other facilities: schools, theaters, department stores, gymnasiums and hotels.

Supermarkets are included on the list, but floors selling commodities deemed essential by the health ministry, such as food, medicine, hygiene products and fuel, can stay open for business.

The central government may set up different measures for each governor to take, depending on the level of spread of the virus in their prefectures.

Such requests and orders from governors are not legally binding, however.

In addition, the measures are not the equivalent of “city-wide lockdowns” that have been imposed in other countries, where violators of, for example, curfews can be punished.

The revised law in Japan has no clause that forcibly prohibits residents from going out. The law cannot suspend public transportation operations, either.

Abe himself has stated a city-wide lockdown is “impossible to do” in Japan.