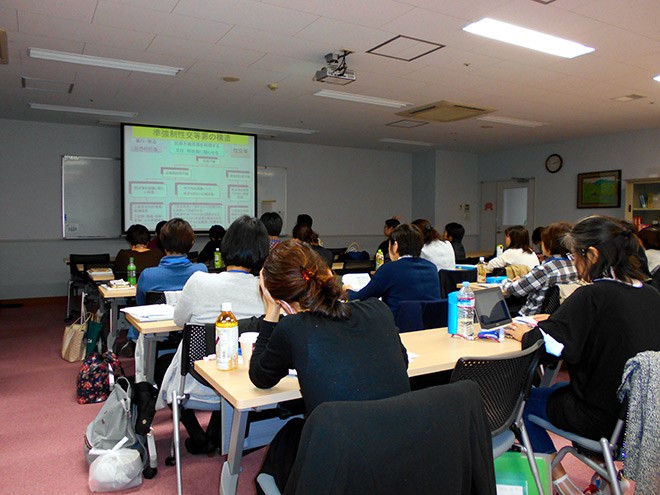 Nurses and other workers take a course on how to assist victims of sexual violence in Nagoya’s Showa Ward in November. (The Asahi Shimbun)

A medical association has established a system to certify nurses who are qualified to give victims of sexual violence assistance ranging from treatment to filing criminal complaints with investigators.

The Sexual Assault Nurse Examiner-Japan (SANE-J) system was set up by the Japan Association of Forensic Nursing, a group of nurses and other professionals who have studied how to care and comfort people who are physically abused.

The first certification test is expected to be held as early as this year for nurses who have taken the association’s course.

The association studied the original SANE program that started in the United States in the 1970s. It created the Japanese version after looking at the Japanese judicial system and how other countries care for the victims.

“We want nurses to have a minimum level of knowledge on what they can do to help victims of sexual violence under Japan’s health care and legal systems, as well as what is needed to provide adequate assistance,” said Naomi Kano, director of the association who also is a professor of women’s health nursing at the Ibaraki Prefectural University of Health Sciences.

Kano became aware of the need for expertise in assisting victims of sexual assault after an acquaintance who is a nurse consulted her around 1995.

The nurse told Kano that nobody at her hospital knew what to do when a victim of sexual violence visited there.

At that time, nurses did not have shared knowledge on how to respond to such victims. And only a few nurses came in direct contact with the victims, Kano said.

Kano and her colleagues explored ways to help victims by listening to experts with experience in providing the necessary support.

They also learned to reject wrongful doubts about sexual assaults because the victims are “too calm” to have undergone such a horrible experience or that their accounts are “inconsistent.”

Kano and her colleagues also met with officials with the National Police Agency and medical professionals in Canada to explore how to best create the Japanese version of SANE.

They opened a course on how to assist victims of sexual violence in Tokyo in 2000, the first in the nation. That was followed by similar endeavors in Aichi and other prefectures.

The course includes lectures by police officers on how they respond to sex crimes. Experts at the course also discuss forensic examinations of victims, while others talk about how to approach victims who are children, males or sexual minorities.

Kano said about 600 people have taken the course over 20 years.

A recent course was held at the Japanese Red Cross Nagoya Daini Hospital in Nagoya’s Showa Ward between October 2019 and January.

Miyoko Nagae, a professor of women’s studies at Nihon Fukushi University in Aichi Prefecture who is involved in the course given in the prefecture, said current support for victims is still not enough.

Nagae is also the deputy director of the Japan Association of Forensic Nursing.

Kano and Nagae plan to expand the course to many locations to create a network of certified nurses and other workers with expertise in helping sexual-abuse victims.

“It will be better if more people and venues become available for victims to turn to,” Kano said. “We will push this certification system as a process to expand assistance.”