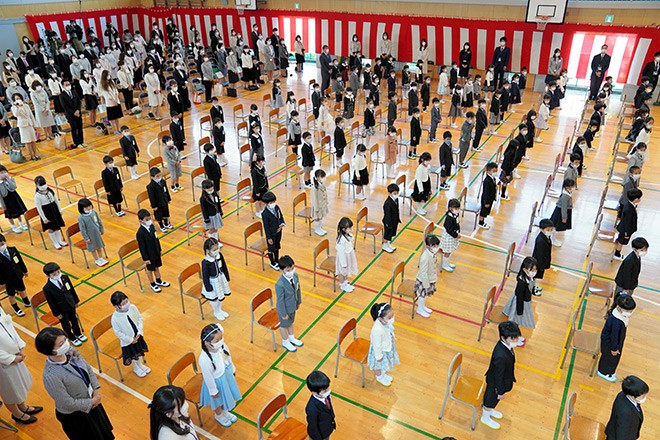 Students and parents, wearing masks and maintaining distance from one another, attend the entrance ceremony at Nakayama Elementary School in Yokohama on April 6. (Ryo Kato)

Even as concerns over the spreading coronavirus infections dampened the mood, many schools across Japan continued to hold opening and entrance ceremonies on April 6.

To reduce the risk of infection, one entrance ceremony was held outdoors in the schoolyard. Another school canceled the ceremony and just handed out the necessary documents to students and parents.

Yokohama Municipal Nakayama Elementary School in Yokohama’s Midori Ward, with a total of 612 students, held the entrance ceremony on April 6. The 106 new first-graders wore face masks as they entered the school grounds.

The ceremony was held in the gymnasium as usual but shortened to about 20 minutes. The students were seated apart from each other and the doors and windows were opened to allow the air to circulate. One parent or guardian was allowed to attend the ceremony per student.

“I am relieved that we were able to hold the entrance ceremony because I was worried about it,” said School Principal Yoshio Nagano.

The city’s board of education initially planned to restart classes on April 8 but rescinded the plan because of parental concerns as the number of infections soar in the Tokyo metropolitan area.

Most schools run by wards, cities, towns and villages in Tokyo, excluding schools located on islands, will continue to be closed until the end of the Golden Week national holidays in early May.

Schools staggered the arrival times for students by grade. They also will allow only new students and teachers to attend the entrance ceremony on April 7.

But some school faculty questioned the safety of holding such events.

A male high school teacher in his 30s in central Tokyo pointed out that about 90 percent of the students travel to school by public transportation.

“Even if we ask them to come to the school at different times by grade, there is a high risk to having 40 students in one classroom," he said. "I am worried that they may go to a cafe or restaurant afterward because they have not seen each other for some time.”

Other teachers at his school also voiced concerns, asking "Is it really all right to let them come to school?” and suggesting that, “We should cancel or postpone (the ceremonies).”

The teachers also questioned risking their own safety in attending the ceremonies.