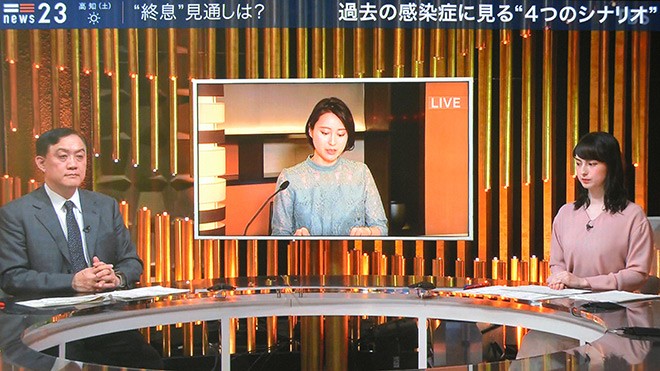 Ayaka Ogawa, an anchorwoman of "News 23," middle, talks via a monitor from an offsite location on April 3. (From a TV screen)

Even legendary samurai and "rakugoka" comedic storytellers on Japanese TV are bowing to the novel coronavirus outbreak, as highly rated shows are being delayed and performances filmed without studio audiences.

The novel coronavirus outbreak has turned TV stations and productions upside down. Producers are removing any physical contact from scripts, on-location shoots are being canceled and members of variety shows are performing remotely.

“We are under a state of emergency,” one staffer said.

Another said that the TV industry has suffered a “megaton-class impact.”

“Shoten,” a long-running entertainment program on the Nippon Television Network Corp., was filmed without a studio audience--a vital component of the show--on March 29.

The highlight of the show is called “ogiri,” where rakugoka play a game and offer comic responses to questions.

When the respondent draws a big laugh out of the audience, a rakugoka who is doing the MC duties gives the performer one or more “zabuton” cushions. If a joke falls flat, one or more cushions are removed.

“There is no way of knowing the reaction from the (audience),” Shunputei Shota, the MC rakugoka, told the performers appearing on the program that day. “So, no zabuton today,” he said jokingly.

Usually, the show is recorded in a hall before a large studio audience. But the staff decided to do the taping without a live audience for the first time as a safeguard against the spread of the novel coronavirus.

Throughout the show, scanty applause and laughter were heard, apparently by staff members present at the taping.

The global pandemic is making it extremely difficult for staff to go outdoors to shoot a segment, in addition to reporting overseas as many countries have tightened border controls and suspended visas.

Another show on the Nippon Television Network called “Sekai no hatemade itte Q” relies on segments in which talents go overseas and delve into adventures and mysteries.

But that format will soon change.

“Once they run out of segments (that have already been recorded), staff will begin filming in domestic locations,” said Hiroyuki Fukuda, a board director of the company, at a regular news conference on March 23.

But that will not solve the problem, according to a director at a production company.

“We’ve been told not to go out, and it is very difficult to do a (location shoot)” even in Japan, the director said.

The pandemic has affected shooting and the airing schedules of dramas.

Nippon Television Network has decided to do the same for two weeks starting from April 6.

TV Tokyo Corp. has suspended recording of shows for the time being.

TBS has postponed seven variety shows and three dramas that were to premiere this spring, including the followup to the hit drama series “Hanzawa Naoki.”

Two new dramas of Nippon Television Network have been postponed to a later date as well.

TV Asahi has pushed back the airing of the first episode of a drama starring popular actor Takuya Kimura.

“We cannot transport the staff and equipment necessary for shooting. Nor can we arrange a meeting place,” said an affiliate of a TV station.

A request to use a location outside the TV station has been turned down due to the pandemic, causing production to fall behind schedule, the affiliate said.

Some have raised a red flag over scenes requiring intimate contact between the actors, while others have wondered about the effect of cutting kissing scenes from the script.

“It’s almost impossible to direct a drama with restrictions like ‘no hugging,’” moaned an NHK staffer. “When the script calls for exchanging punches, how can actors do so if they are not supposed to touch each other?”

ANCHORING FROM A DISTANCE

News shows have made adjustments to minimize the risk of virus infection.

Ayaka Ogawa, an anchorwoman of TBS’s nightly show “News 23,” has been reading the news and interviewing guests from an off-site location since April 1.

The decision was made to protect Ogawa who is pregnant, after a male staffer at the network’s headquarters in Tokyo’s Minato Ward tested positive for the coronavirus on March 31.

Other stations have rearranged the news studio set so that anchors and guests can maintain a safe distance from each other.

Takahiko Kageyama, a professor at Doshisha Women’s College of Liberal Arts and a former producer at Mainichi Broadcasting System Inc. (MBS), said production of a drama or a music show generally involves dozens of staffers.

Suspension and postponement of productions of TV shows under the current circumstances are unavoidable and uncontrollable, Kageyama said.

“It is also an opportunity for (the industry) to think about a new entertainment format," he said. "The impact of the new coronavirus may change the future of TV programming."

(This article was written by Yusuke Miyata, Kenro Kuroda and Takahiro Kawamura.)