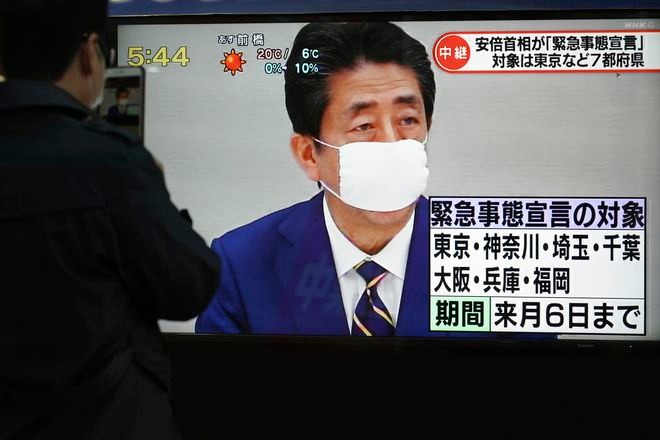 A pedestrian stops to watch Prime Minister Shinzo Abe declare a state of emergency on April 7 in Tokyo. (AP Photo)

Prime Minister Shinzo Abe on April 7 declared a state of emergency over the novel coronavirus outbreak for the seven prefectures of Tokyo, Kanagawa, Saitama, Chiba, Osaka, Hyogo and Fukuoka.

He made the declaration during a meeting of the government task force responding to the coronavirus outbreak.

"There will be a need to ask residents for their total cooperation with the requests from the various prefectural governments to refrain from leaving their homes as well as the continuation of business operations needed to maintain social functions,” he said. “We ask for the sufficient understanding of each and every individual citizen.”

He planned to explain the declaration in more detail at a news conference directed at a national audience scheduled for later on April 7.

The state of emergency will take effect immediately and last until May 6, the end of the Golden Week string of national holidays.

The declaration is the first one made under a revised special measures law that passed the Diet in March to give the government greater authority to deal with the spreading coronavirus outbreak.

The governors of the seven prefectures will issue specific requests calling on residents to refrain from leaving their homes and asking certain businesses to temporarily shut down their operations.