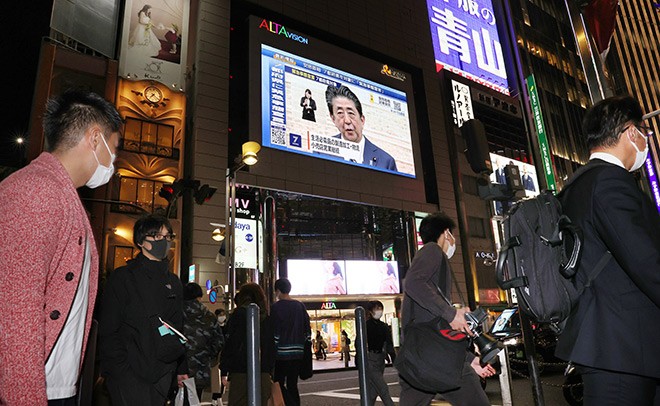 The month ahead will sorely try the patience and endurance of residents in Tokyo and six prefectures under a state of emergency that Prime Minister Shinzo Abe declared on April 7.

Abe and the governors of Tokyo as well as Kanagawa, Saitama, Chiba, Osaka, Hyogo and Fukuoka prefectures have shouldered a heavy political responsibility and accountability.

Their political leadership is being tested in a fight to overcome the novel coronavirus crisis by gaining the understanding and cooperation from the public.

With no abatement of the pandemic in sight, Abe issued the declaration under a revised special measures law. It will remain in effect until May 6, when the holiday-studded Golden Week ends.

SERIOUSNESS OF CURTAILMENT OF PRIVATE RIGHTS

A little more than three weeks have passed since the enactment of the revised special measures law that covers the coronavirus outbreak.

Why did Abe decide to declare a state of emergency now?

Abe told a news conference on April 7 that infections were surging in major cities, such as Tokyo and Osaka, creating a crisis for the health care system. As for the one-month duration, he explained this would be the length of time necessary to confirm the effectiveness of measures being implemented.

Abe did not consult any experts before issuing his abrupt requests for cancellations of events and nationwide school closings.

But the content of the declaration was decided with input from an advisory committee in keeping with the special measures law. Coupled with the fact that Abe notified the Diet of the declaration in advance and that lawmakers deliberated the issue, at least some degree of transparency was secured for the whole procedure.

Abe stressed that the declaration should not be equated with “lockdowns” that are being enforced overseas and that “the impact on social and economic activities would be kept minimal.”

Still, he urged the public to try to reduce face-to-face personal contact “by 80 percent if possible or by 70 percent at the least.”

Residents are not penalized for noncompliance with governors’ requests or instructions under the special measures law to stay home or temporarily close commercial and entertainment facilities.

That said, those measures must not be taken lightly as they do have a legal basis.

The extent of facilities for which local governments will call for closures is expected to be substantial and have quite an impact on daily life.

And there are legally enforceable orders, such as those for use of private land to build emergency hospitals without the owner’s consent or for sales or storage of pharmaceutical supplies and medical equipment.

The Asahi Shimbun in its editorials has called for careful consideration before declaring a state of emergency that is bound to restrict the freedom and rights of citizens and make them feel as if the entire society is being closed down.

The special measures law comes with a provision for “respecting the fundamental human rights,” which states that the restriction of such freedom and rights “must be kept to a minimum.”

The government must fully recognize the gravity of this provision and act accordingly.

Along with the declaration, the government announced a package of emergency economic measures with a record 108 trillion yen ($946 billion) in economic effects.

However, the only households that qualify for the 300,000-yen payouts are mainly those whose incomes have fallen below the levels that exempt them from the local resident tax.

This means that most people who fall under the middle-income category and those above it are likely ineligible for the payouts unless they lose their jobs.

The government will provide cash payouts of up to 1 million yen for independent business operators and up to 2 million yen for small and midsize enterprises. But again, this is conditional on their sales being slashed by half, which is rather drastic.

A loan program is already in place, but any loan is premised on the borrower repaying it, and there is a limit to how much a struggling business owner can pay back.

The cash payouts can give business owners some sense of relief, but it can hardly be considered sufficient.

The government remains consistently opposed to the argument of opposition parties that asking people to refrain from business activities should go hand in hand with compensation for their losses.

Providing businesses with as much assistance as feasible, by prioritizing the protection of workers’ jobs and daily lives, should definitely help reduce chances of further infections.

Will the declaration of a state of emergency be called off one month from now? What are the conditions that warrant it? It is also the responsibility of political leaders to give the public some specific ideas.

During the April 7 news conference, Abe noted that the likelihood of an “overshoot” in the number of patients will diminish once the daily new infections can be brought down to a level that will allow health authorities to concentrate on containing specific clusters of infections, rather than continuing across-the-board measures.

However, Abe gave no specifics for the required level.

We understand the difficulty of making predictions when dealing with something invisible like the novel coronavirus, but the government must try to come up with some sort of exit strategy by consulting with experts.

Abe pleaded for the public’s cooperation, saying the crisis cannot be overcome by administrative efforts alone.

Every member of society is responsible for protecting one another and keeping society running. But for each individual to make the right judgment, it is vital that the government and local administrative authorities are worthy of the public’s trust and ready to disclose accurate and sufficient information in a timely manner.

The Abe administration has a track record of concealing and obfuscating information it doesn't want the public to know.

The prime minister is now being tested on whether he is capable of speaking openly to the public--even about dismal forecasts--and living up to his responsibility.

The government has designated the pandemic as “a historic emergency,” requiring the taking of minutes and the preservation of documents and materials.

Within the government, however, there is a move to limit the scope of official documents for preservation.

The possibility of an outbreak of new infectious diseases is quite high. Everything must be documented in minute detail so that future generations can examine what is happening now and learn lessons from it.

The Diet, as the organ that monitors the administrative branch, bears a heavy responsibility for judging whether the government is taking appropriate actions under the declaration of a state of emergency.