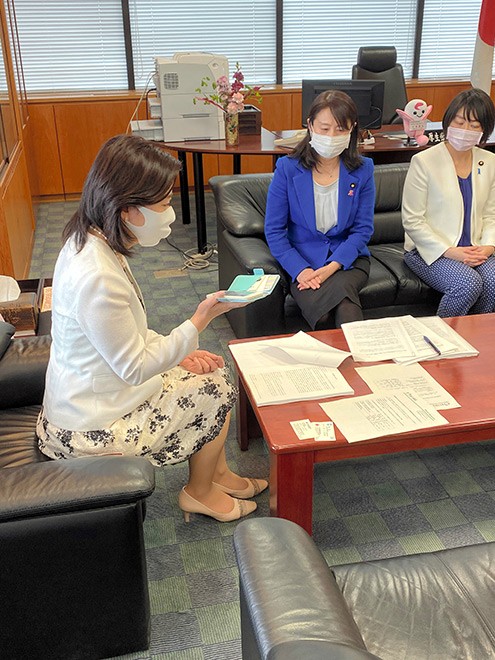 Hanako Jimi, a parliamentary secretary of the labor ministry, listens to a call from a woman who is seeking tougher measures to prevent pregnant women from catching the new coronavirus. (Hiroki Koizumi)

Hundreds of pregnant women whose employers are forcing them to work or denying telework requests have asked the labor ministry to step in to protect them from novel coronavirus infections.

Wakako Yata, an Upper House member of the opposition Democratic Party for the People, handed the written requests she received from 431 expectant mothers to Hanako Jimi, a parliamentary secretary of the Ministry of Health, Labor and Welfare, on April 7.

The ministry has already issued a notice to protect pregnant women during the coronavirus outbreak, but the women say it is not enough and may even send the wrong signal to employers.

The letters said employers have told pregnant workers to take leaves instead of working from home. Some pregnant nurses said they have been ordered to be present when a polymerase chain reaction (PCR) test is conducted to check a patient for the coronavirus.

In Diet sessions, Yata has called for improved measures to prevent pregnant women from being infected.

She told Jimi that the ministry should require companies to allow their pregnant employees who want to keep working to use staggered commuting times and flexible working hours.

Yata also asked Jimi to urge the government to ensure that companies pay allowances to pregnant employees who are forced to take leaves.

A 40-year-old company employee who is five months pregnant and lives in Osaka Prefecture used her smartphone to ask Jimi for tougher measures to protect pregnant women from the virus.

“Some pregnant women are medical professionals who are at high risk of catching the virus,” the woman said over her phone. “Such women are working while facing an agonizing dilemma between fulfilling their social responsibilities and protecting their babies.

“I want the government to prohibit pregnant women from going to work and provide them compensation for lost income until the outbreak subsides.”

The effects of COVID-19, the pneumonia-like disease caused by the novel coronavirus, on fetuses are unknown.

Some of the written requests to the ministry voiced concerns that the anti-flu drug Avigan, which is viewed as a possible cure for coronavirus infection, could harm fetuses, and pregnancy raises the risk of developing severe pneumonia.

The ministry issued a notice on April 1, asking business and labor organizations to promote teleworking and staggered commutes while creating an environment that allows pregnant workers to take time off more easily.

However, some expectant mothers are not satisfied with the ministry’s response.

“It’s impossible to do my job at home,” said a contract employee who is three months pregnant. “I want the government to order companies to ban pregnant employees from going to work.”

The ministry also presented the view that pregnant women “do not need to worry too much” about the impact of coronavirus infections on their fetuses.

“There have been no reports that show infected individuals are more likely to have abnormalities in their fetuses, stillbirths or miscarriages,” the ministry said in its notice.

Some of the pregnant women said they were concerned about the effects of such a view.

“I’m worried that my employer may think there would be no problems if pregnant women get infected and decline my request to take time off,” said a child care worker who is five months pregnant.

Yata told reporters after her meeting with Jimi, “I want the government to take further measures (to protect pregnant women).”