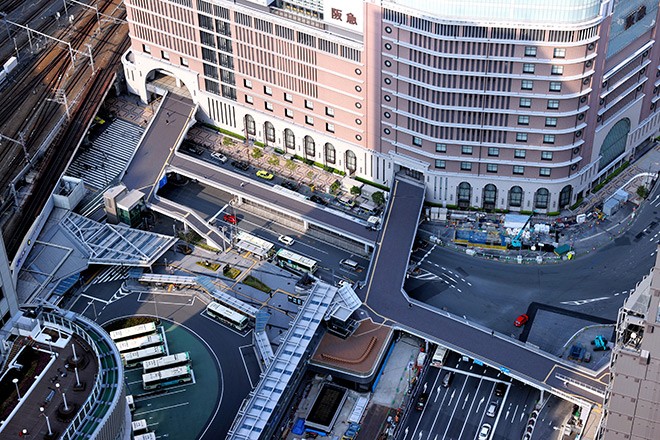 Pedestrian traffic near major railway stations dropped noticeably as Tokyo and six prefectures went under a state of emergency for the novel coronavirus pandemic, according to data analysis.

In areas near JR Tokyo and Osaka stations, foot traffic on April 7 was about 30 to 40 percent lower than the average volume on weekdays in mid-March.

Prime Minister Shinzo Abe declared a state of emergency in the evening of April 7 for Tokyo as well as Kanagawa, Saitama, Chiba, Osaka, Hyogo and Fukuoka prefectures.

Agoop Corp., a Tokyo-based subsidiary of SoftBank Corp., collected and analyzed smartphone users’ location information via an app. Based on the data, it estimated pedestrian traffic within a 500-meter radius from hub stations and busy commercial districts in urban areas on an hourly basis.

March 19 recorded the largest traffic in a peak period on weekdays in the third week of March.

Compared to that day, foot traffic dropped about 38 percent near Tokyo Station and about 33 percent near Osaka Station.

From April 6 to 7, foot traffic near JR Shibuya Station dropped 9.8 percent, while it declined 5.4 percent in the vicinity of Tokyo Station.

In the Tenjin district of Fukuoka, where Nishitetsu Fukuoka Station is located, foot traffic at the peak period on April 7 was about 32 percent less than that on a weekday in mid-March.

The number of people infected with the coronavirus has spiked since late March in Fukuoka.