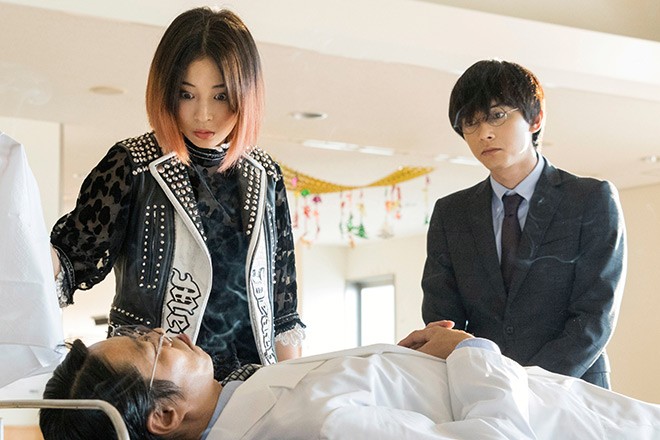 A scene from "Not Quite Dead Yet" ((c) 2020 Shochiku Co. Fuji Television Network, Inc.) (Provided by Shochiku)

With her black hair, big eyes and refined on-screen presence, 21-year-old actress Suzu Hirose comes across as the picture of innocence.

That somewhat belies the fact that she is highly accomplished for one so young, given the professionalism she has brought to her roles on TV and in movies.

Taking on her first comedy role in "Not Quite Dead Yet," Hirose plays a college student and vocalist of a death metal band who despises her father, new territory for the actress whose "innocent" image brought her stardom.

"I felt like venting my emotions and feeling high," Hirose said, the tips of her hair still tinged with pink dye from the role.

The film starts when Nanase (Hirose) learns that her father (played by Shinichi Tsutsumi), the president of a pharmaceutical company, has ingested a drug that makes him appear to be "dead for two days." Nanase tries to save her father with the help of his secretary (Ryo Yoshizawa) as a rival company conspires to cremate his body.

From the outset, Hirose portrays a new persona as she rebelliously rolls her eyes.

"People say that's a new me, but I think Nanase is closer to who I am," Hirose said. "I, too, tend to say things in a very straightforward and cutting way. I have a strong will."

Talking about her first comedy role, Hirose said with a smile: "It was difficult to keep up with the pace and timing, but I felt like it was something I couldn't learn from practice. I keenly felt that I didn't have the talent (for this type of role), so I don't want people to pay too much attention to my acting because it's kind of awkward."

In a brilliant touch, one scene has Nanase giving a professional wrestler a well-aimed kick. Hirose said she had learned kick boxing because she wanted to do her own action stunts.

"My efforts paid off. It was fun," she said.

Last year, Hirose starred in "Natsuzora," an "asadora" morning drama series aired by Japan Broadcasting Corp. (NHK) with Yoshizawa, playing the protagonist who dives into the world of animation.

While filming scenes for "Natsuzora," Hirose had to work on "Not Quite Dead Yet."

The experience of playing two characters that are so different from each other had a comical side for her, she said.

"It was embarrassing because Yoshizawa saw me cursing, like 'Damn you, dad!' for the movie, and then I played the 'asadora' heroine with a pure heart," the actress said.

In 2019, Hirose made her debut on stage in Noda Map “Q”: A Night at the Kabuki, a play by leading playwright and theater director Hideki Noda. It made her realize that walking the boards requires an entirely different approach to acting in television dramas and movies.

While Hirose continues to tackle big projects, she seems to have set her sights on nailing down the essence of acting in its simplest form.

Speaking of her previous roles, many of which required practice to get into character, a cheer dancer, for example, Hirose said: "When my role requires me to use my body, I end up feeling satisfied and rewarded just for it. I want to take a different approach, walking onto the set casually and doing a story about a family."

"Not Quite Dead Yet" is now showing across Japan.