Tokyo names businesses to shut under state of emergency 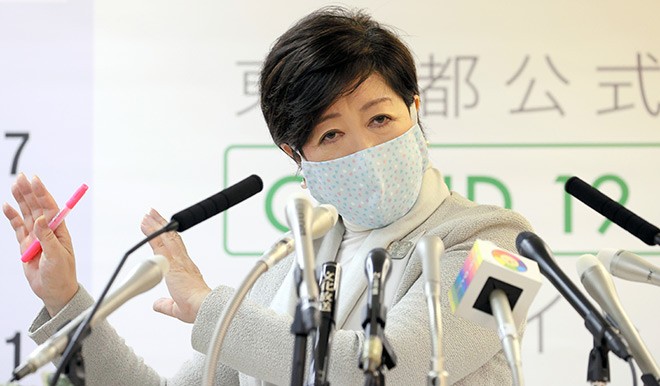 Tokyo Governor Yuriko Koike announces during a news conference on April 10 the list of businesses she will ask to close operations. (Shiro Nishihata)

Tokyo Governor Yuriko Koike on April 10 announced the list of businesses ranging from movie theaters to pachinko parlors that will be asked to close in the capital to prevent the further spread of the coronavirus.

“I want all Tokyo residents to come together as one so we can overcome this national difficulty,” Koike said at a news conference after announcing the list of closures under the declared state of emergency.  “I ask for the cooperation of all Tokyoites.

“Some people may find some of these measures to be severe even though it is temporary," Koike added, although she "believes that the result will be to bring a further spread of coronavirus infections under control quickly.”

The list doesn't contain some types of businesses that the Tokyo metropolitan government had fought with the Abe administration to include, such as barber shops and beauty salons, as well as sales floors that offer daily necessities in department stores and home products retailers.

Yet it is still staggering, covering everything from bars to internet cafes to swimming pools.

Businesses in the sectors covered in the list will be asked to close from April 11 to at least until the May 6 end of the current state of emergency declaration, Koike said.

Restaurants are asked to limit hours to between 5 a.m. and 8 p.m., with those selling alcoholic beverages asked to close by 7 p.m.

The major aim is to have Tokyo residents avoid congested and unventilated spaces where they may come in close contact with others.

The Tokyo metropolitan government will set up a special fund from which businesses that cooperate with closure requests will receive up to 1 million yen ($9,200).

Businesses that close two or more outlets will receive the maximum amount, while those operating only a single outlet will receive 500,000 yen for shuttering it.

The closure requests fall under provisions of the revised special measures law designed to deal with the coronavirus outbreak. But some closure requests to smaller commercial facilities will be made under the Tokyo metropolitan government’s own guidelines.

Due to concerns that many of the infections arise from time spent in entertainment districts at night, a wide range of commercial and leisure businesses will be asked to close their doors.

These include cabarets, night clubs, video game centers and mah-jongg parlors. Agreement on the last two sectors was only reached after days of negotiations between the central and Tokyo metropolitan governments.

The metropolitan government had also sought to put “izakaya” Japanese-style pubs on the closure list, but the eateries will be allowed to remain in operation, although with much shorter business hours.

With more than 1,500 confirmed coronavirus cases in Tokyo, metropolitan government officials wanted to release the list as soon as possible after Prime Minister Shinzo Abe declared a state of emergency on April 7.

However, protracted negotiations with the central government over which business sectors to include delayed the list's release until April 10.

Despite the wrangling over details, Tokyo “got almost all of what we wanted," said one metropolitan government source, adding, "the key from now will be how much businesses cooperate.”

Kanagawa Governor Yuji Kuroiwa also held a news conference in which he said he would ask businesses in his prefecture to shut down operations from midnight.

Kuroiwa said he would follow the same standards announced earlier by Koike when making the request to close.

“If different standards are used, closure requests would be made of Tokyo businesses, but not those in Kanagawa,” Kuroiwa said. “That might lead to a rush of people (to Kanagawa).”

Such a development would hamper efforts to keep residents away from crowded areas and unventilated spaces, which are hotspots for virus transmission, Kuroiwa said.

Facilities that will be asked to suspend operations:

Facilities that will be asked to shut down depending on what type they are:

Elementary, junior high and senior high schools (To be closed, in principle)
Day care centers (Operating hours to be shortened)

Facilities that will be asked to cooperate in implementing measures to prevent coronavirus infections:

Facilities that will be asked to shorten business hours: