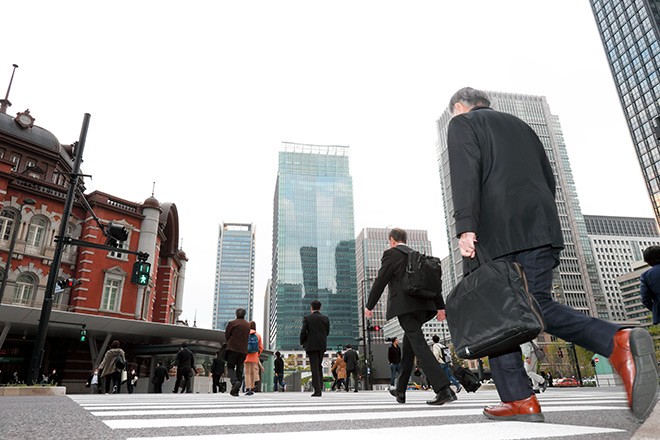 It would seem exceptionally foolhardy for people in Tokyo to risk their health by going to work, especially after the central government declared a state of emergency over the new coronavirus pandemic on April 7 and the vast majority of residents are staying indoors. But for some, they don't have a choice.

People have all sorts of reasons for making the commute.

Some work for small companies and staying at home is not an option, while others perform essential services--even though many areas of the metropolis of 13 million increasingly resemble ghost towns.

On April 9, the streets of the capital's Nishi-Shinjuku district, which boasts many high-rise structures, including the soaring Tokyo metropolitan government building, were nearly deserted.

That was until around 4 p.m., when company employees gradually started to emerge from their offices to make the trek home.

HAVE TO GO TO WORK

Noriyuki Hosoi, 60, who has a managerial position at a construction company, headed to the Tokyo metropolitan government building to calculate the cost of contracted work of repairing a subway station.

Hosoi keeps going to the office as his company has yet to make arrangements to enable its dozens of employees to telework at home and elsewhere.

“I know I’ll have a lower risk of infection if I work from home, but small companies like us can’t afford to switch to such a work style,” he said.

Hosoi added that he is required to make weekly business trips to Yamanashi Prefecture in central Japan to oversee repair work on a condominium there.

He said he needs to be on-site to assess progress and how much more work needs to be done.

While Hosoi understood the government's rationale for asking the public to reduce direct contact with others by 70 to 80 percent as a way of reducing the risk of spreading infection, he said that in his industry personal contact is everything.

“Sales staff win clients’ trust by meeting them in person and showing who they really are," Hosoi said. "If we followed the government’s request, we wouldn’t be able to continue our business.”

She said the company had instructed many of the staff on permanent contracts to work from home, but temp staff were not included.

“I have to work at the office to earn money in the absence of any instructions,” she said. “I just pray the company will at least tell us what it is planning to do.”

A man who works in advertising said he knows that working from home is safer and he wants to avoid crowded places, such as trains, as much as possible, but he still chooses to go to the office.

He said the day care center that his 1-year-old son attends was closed under the provisions of the state of emergency.

“If my child starts crying, I can’t make a video conference call,” said the 31-year-old man. “After all, I can work much more efficiently at the office.”

Many restaurants and clothing shops closed temporarily on normally bustling Nakadori street in the Marunouchi business district in front of Tokyo Station.

A 45-year-old female employee of a company involved in finance-related businesses said her job is to register customers’ personal information, which requires her presence in the office as she can't input the data at home.

She said most of her colleagues are going to the office as usual.

“I feel uncomfortable about still going to work in light of the risk of catching the virus,” she said.

She also admitted to “feeling guilty” about going to work when so many businesses, such as “izakaya” eateries, have already voluntarily closed.

A 72-year-old man who runs an equipment installation company in Tokyo’s Shibuya Ward and employs 10 or so people said he would dearly like to introduce teleworking.

But he doesn’t have the necessary equipment to do web conferencing, including web cameras, or even any confidence in working in a digital mode.

“At my age, it’s difficult to do everything online,” he added, looking resigned.

Tokyo’s Ota Ward is home to around 3,500 small factories. A man in his 50s who works at a factory that produces screws and other precision parts said teleworking was simply not an option.

“It’s impossible to reduce direct human contact by 80 percent since I have no choice but to work at this tiny factory using machines,” he said.

He added that his 10 or so factory colleagues are also working as usual, and not even with staggered commuting times. While the man admitted he is scared of catching the coronavirus, he said he is grateful to still have a job.

A 46-year-old man who works in the metal-processing industry said he will keep working at his factory as long as it receives orders. The factory has about 20 workers.

The factory bosses have ordered that windows be kept open and that the workers thoroughly wash their hands frequently, but concerns about infection remain.

“I will take leave if I can get paid leave,” he said. “I have to keep working in order to live.”

Workers wearing face masks was the norm in the Kannai district of Yokohama, a port city in Kanagawa Prefecture. Many public offices and private businesses have their office buildings in the district.

A female employee of a leading parcel delivery company said her workload had not fallen since the state of emergency was declared. She always wears a face mask and checks her body temperature three times a day.

“I prefer working outdoors to staying at home all day since I can feel refreshed by getting some fresh air,” the 20-year-old said.

The Motomachi shopping district in Yokohama is usually teeming with shoppers, but not now.

Although the number of shoppers has dropped drastically following the government’s request for people to refrain from going out, many shops remain open.

The operator of a “yakitori” grilled chicken joint was worried about being able to keep up rental payments and pay employees if it was forced to close until May 6, when the state of emergency is expected to be lifted if there are signs the health crisis has been brought under control.

Some restaurants are now offering take-out meals only.

Kazuko Kadokura, 71, runs Ishikawaya, a Japanese-style restaurant whose specialty is “oden,” a stew of ingredients cooked in a broth.

“We should have stopped offering take-out meals as well, but there are people who rely on us," she said. “We can make a living because those people buy our meals. It would be a difficult decision to close my business.”

Some workers, such as those in the public transportation sector, cannot afford to take leave.

At East Japan Railway Co. (JR East), about 40 to 50 percent of employees in the public relations and human resources departments of the company’s headquarters are now working from home.

But drivers, station staff and those who are directly involved in train operations, such as maintenance of tracks, have no choice but to venture out each day to ensure trains run safely.

JR East President Yuji Fukasawa expressed a sense of crisis over the state of emergency at an April 7 news conference.

“We have implemented thorough measures, including washing hands and disinfecting places, but we can’t keep providing train services if our employees test positive," he said. "So, we are trying to make sure that won’t happen.”

The main building of the Tokyo metropolitan government office employs around 10,000 people.

In March, the metropolitan assembly approved a supplementary budget for buying headsets and web cameras for all staff members, and the Tokyo government started recommending that 70 to 80 percent of its work force switch to teleworking from April 8.

However, they are at the front line of handling the outbreak.

One employee said it was vital to provide information about the virus to Tokyo residents, something that staff members cannot do from home.