Kanagawa in step with Tokyo; Saitama, Osaka to follow suit 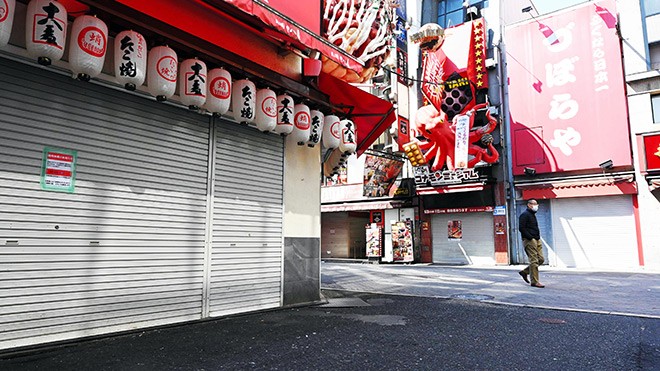 Few people are out and about in the Minami district of Osaka’s Chuo Ward, where store shutters came down April 9 after outbreaks of the novel coronavirus. (Nobuhiro Shirai)

Authorities in Tokyo's neighboring Kanagawa Prefecture requested business operators to shut down from April 11 to stem the spread of the new coronavirus.

The measure follows steps announced April 10 by Yuriko Koike, the governor of Tokyo.

Kanagawa Governor Yuji Kuroiwa said at a news conference on April 10 that the prefectural government will partially compensate those enterprises with funds provided by the central government as emergency grants.

Koike had requested that libraries, gymnasiums, pachinko and karaoke parlors, as well as many other facilities, close. She said those that cooperate will receive financial compensation from the metropolitan government.

Motohiro Ono, the governor of Saitama, another prefecture that shares its border with Tokyo, said his request for a shutdown of 10 kinds of facilities, including universities and theaters, will go into effect from midnight April 12.

Hirofumi Yoshimura, the governor of Osaka Prefecture, expects to make a similar request for primarily entertainment facilities on April 13.

Toshizo Ido, the governor of Hyogo Prefecture, said at an April 10 news conference that details of the prefecture’s policy have yet to be hammered out.

Tokyo and the prefectures of Kanagawa, Chiba, Saitama, Osaka, Hyogo and Fukuoka have been placed under a state of emergency that was declared April 7 by the central government.

But most of those prefectures are reluctant to offer monetary compensation to businesses asked to close, citing their own limited funds.

Although the Saitama governor acknowledged the importance of keeping in step with his counterparts in the greater Tokyo area, he said businesses which cooperated with requests to close should receive relief aid from an initiative funded by the central government.