Bar business in Tokyo further dries up in state of emergency 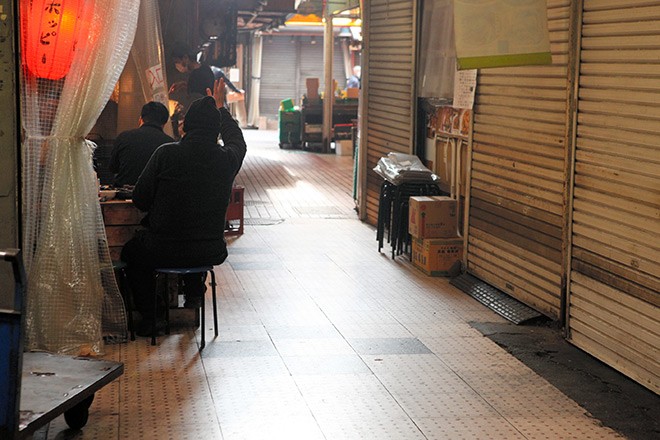 Some drinking places are open in the Akabane district in Tokyo’s Kita Ward around 2:30 p.m. on April 11. (Hiroshi Nakano)

The normally boisterous cheap drinking places around Tokyo are quickly growing silent as the novel coronavirus outbreak continues to take a toll on their business.

Many of the ubiquitous bars have shut down. And the ones that have remained open are generally following the metropolitan government’s request to drastically reduce their operating hours to prevent a spread of the virus.

After Tokyo and six prefectures were placed under a state of emergency, the Tokyo metropolitan government asked drinking places and restaurants to limit their operations from 5 a.m. to 8 p.m. from April 11 to May 6. It also asked that they stop serving alcohol at 7 p.m.

Many drinking spots close to JR Akabane Station in Tokyo are usually teeming with customers, even during midday, on Saturdays and Sundays.

But only a handful were open on April 11, and just a few customers showed up.

One of them, a 59-year-old taxi driver, said his visit to his usual bar in the neighborhood was his first in two weeks.

“I came here because I am worried about this place,” he said. “I am hoping the day will soon come when we can drink without any concerns.”

The shop has seen a drop of 60 to 70 percent in customer numbers since the state of emergency declaration, but chose to remain open by cutting its operating hours.

In Musashino on the outskirts of Tokyo, nearly half of the small izakaya and other drinking establishments remained open in what is known as Harmonica Alley.

Few people were walking there on April 11.

A 60-year-old proprietress said she opened her place at 4 p.m. and planned to close at 8 p.m., four hours earlier than usual, to comply with the metropolitan government’s request.

She said her income in recent weeks has dropped to 20 percent of normal levels.

One drinking spot in Harmonica Alley was packed with customers. But at 8 p.m., almost all of them had left.

The owner of a standing bar at the entrance of the alley said he will follow the metropolitan government’s request on operating hours.

“I am concerned about possible criticism if I keep my place open beyond those hours,” he said.

(This article was written by Hiroshi Nakano and Ryo Yamagishi.)