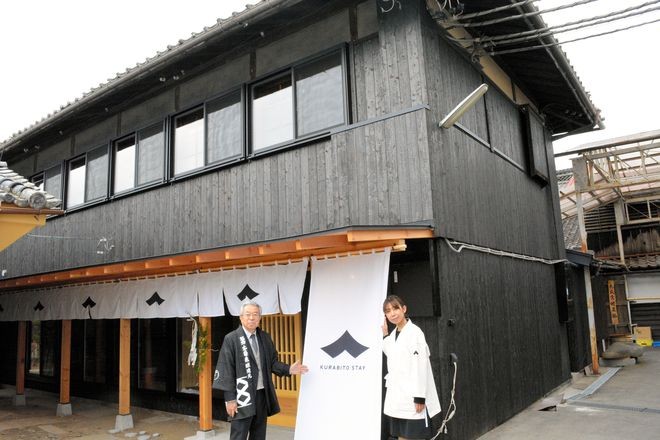 SAKU, Nagano Prefecture--In a sake lover's dream come true, part of a century-old brewery of the beverage here was renovated into a hotel to host wannabe brewers.

The Kurabito Stay hotel opened for a sneak media preview at the end of March ahead of its initially scheduled debut during the Golden Week holiday period from late April to early May.

But sake fans eager to book a stay and try their hand at brewing may have to wait a little longer to do so.

Due to the coronavirus pandemic, the hotel, in the city's Usuda district, announced April 8 it was temporarily suspending reservations.

When its doors do officially open, the hotel, which sees domestic tourists from the Tokyo area and foreign visitors to Japan as its main clientele, has a packed three-day plan on hand for guests that takes them inside sake culture.

In addition to gaining hands-on sake brewing experience at the brewery, guests can participate in extra activities including donning traditional kimono at a kimono shop and learning to make "soba" buckwheat noodles at a nearby noodle stand of a local shopping street.

Guests can also join a tour that visits all 13 sake breweries in Saku and a neighboring city of Komoro.

Additional charges are required for each activity.

With so many breweries in close proximity, tourism planner and Komoro native Marika Tazawa, 33, saw an opportunity to promote the areas as a sightseeing resort with the breweries as its core and partnered with Kitsukura Sake Brewing Co. for the project.

"It should provide a real thrill for sake fans from around the world because of all its local resources," Tazawa said.

The brewery, currently headed by Tamio Ide, has more than a 300-year history of making sake.

The hotel located on the brewery's grounds is a two-story wooden structure with a total floor space of 160 square meters including eight guest rooms (measuring five to two-and-a-half tatami mats) on the second floor.

A shared space where guests can mingle equipped with a library with books on Japanese sake is on the first floor.

The building was part of a brewery built in 1921, which had been used by "toji" (master brewers) and "kurabito" (brewery workers) as a lodging facility during the winter brewing season. The structure still retains the ambience of the brewery even after being renovated for use as a hotel for tourists.

Guests who stay overnight can learn the art of producing "koji" (malted rice), preparing it for fermentation and making "amazake," a sweet sake, under the guidance of kurabito at a local brewery.

During the peak of brewing in winter months, the hotel charges 59,000 yen ($543), excluding tax, for a three-day, two-night stay, with two breakfasts and one dinner included. Sake that guests brew during their stay is later sent to them by the hotel.

In preparation for the hotel's opening, businesses in the area have been drawing up English menu, and training staff to serve customers from overseas.