Teleworking takes root, but it is not without a few hiccups 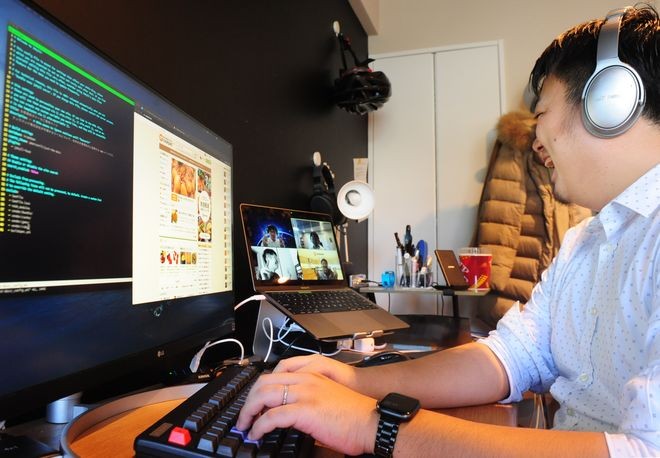 Hokuto Hoshi, a Cookpad employee, works from his home in Tokyo on March 9. (Kazutaka Kamizawa)

Teleworking is the new norm in Japan, like elsewhere in the world, as companies desperately try to find ways to prevent the spread of new coronavirus infections among employees and everyone else while continuing to stay in business.

And this has raised hopes of introducing greater flexibility and diversity in work styles, including staggered shifts. It could also herald a sea change in the way people work far into the future.

But it doesn't come without challenges in terms of juggling workloads, parenting and protecting corporate security.

Before the health crisis flared, teleworking was being promoted as an effective measure to ease traffic congestion in the capital during the 2020 Tokyo Olympics and Paralympics, now postponed by a year because of the global pandemic.

It has since firmly taken root with many businesses, mainly big companies.

An expert in the field stresses the importance of labor management in getting employees to enjoy the freedom of teleworking.

“Offering various options of work styles helps companies attract highly talented people," said Yuichiro Mizumachi, a professor of labor laws at the University of Tokyo’s Institute of Social Science, citing the dwindling working population. “But that will become meaningless if teleworking leads to working long hours or blurred boundaries between work and private life. That is why good labor management is so crucial.”

Hokuto Hoshi's way of doing things offers a typical example of the new working environment in Japan, a country long known for a work force willing to put in long hours.

Hoshi, 30, set up a video conference from his computer at his Tokyo home one afternoon in early March to talk to his colleagues at Cookpad Inc., operator of Japan’s leading recipe-sharing website.

Hoshi promotes teleworking at the company and holds similar online meetings a couple of times a day.

Around 400 employees, excluding sales staff, used to make the trek in each day to work at the company’s office in Tokyo’s Shibuya Ward. Now, they are, in principle, working from home and only permitted to go to the office to seal a contract and for other unavoidable reasons. As of March 31, only about 20 employees were working at the office.

The company initially planned to allow its employees to work from home until the end of March, but extended the period until the end of May, taking into account a March 25 request by the Tokyo metropolitan government to refrain from nonessential outings.

The business lobby Keidanren (Japan Business Federation) carried out an emergency survey through early March of its member companies and found that 69 percent are planning to introduce or have already introduced teleworking or remote working. Nineteen percent said they hadn't decided yet.

At an emergency teleworking consultation seminar held in early March with about 20 small and midsize companies based in the Tokyo metropolitan area, participants shared problems they face while working from home.

“When I take care of my friends’ children at my home, they are so noisy that I can’t focus on my work,” said one participant. “That makes me eager to go to work sometimes.”

“My wife is in the same business but works at another company and she is also teleworking,” said another. “So, I use a walk-in closet as my ‘office’ to maintain confidentiality of my company’s information.”

From early March, Kyowa Co., a cosmetics and health food company, began pushing its 70 or so employees to work from home. As of March 31, 95 percent of them had done just that.

“It’s good to know that we can still do our job without going to the office,” said Hidemi Uema, a Kyowa public relations official who works a couple of days a week from home. “But we’ve yet to provide support for employees who have children at home. We need to draw up measures if schools remain closed through April and beyond.”

Many schools around the country closed in March in line with a government request to prevent a further spread of infections.

(This article was written by Kazutaka Kamizawa, Aki Sato and Shimpei Doi.)