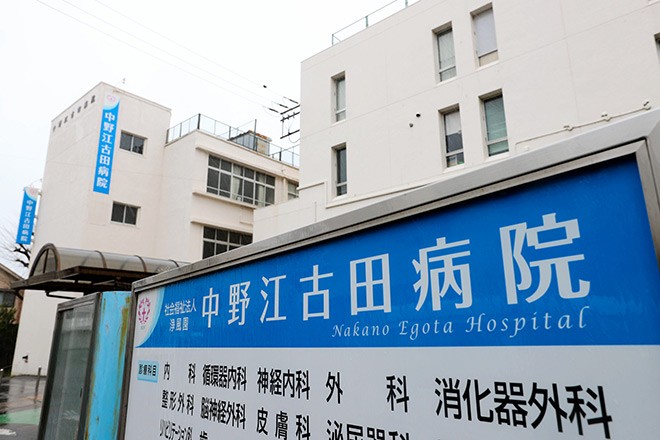 At Nakano Egota Hospital in Tokyo’s Nakano Ward, a total of 92 coronavirus infections have been confirmed as of April 12. (Nobuo Fujiwara)

Eighty-seven inpatients, doctors, nurses and other staff at a hospital in the capital’s Nakano Ward tested positive for the new coronavirus on April 12, according to the Tokyo metropolitan government.

None of them is seriously ill.

The number brings the infected total at Nakano Egota Hospital to 92, following confirmations as of April 4 that five patients there had contracted the coronavirus.

The 87 infections there accounted for more than half of the 166 new cases detected in Tokyo on April 12.

The outbreak at Nakano Egota Hospital is the second largest outbreak detected in Tokyo hospitals, after Eiju General Hospital in Taito Ward, where more than 160 patients, doctors and other personnel tested positive and 20 inpatients died from the virus.

The first cases at the facility were confirmed after Nakano Egota Hospital reported multiple suspected infections, according to the metropolitan government.

By April 4, they confirmed five inpatients had the virus.

Additional testing of the remaining 100 inpatients or so, as well as doctors and other health workers who had physical contact with the five infected patients, revealed that 87 had the virus.

Most of the infected patients are senior citizens, who remain in the hospital, metropolitan government officials said.

Complying with health authorities' guidelines, hospital officials are considering moving them in stages to other hospitals that are equipped to deal with the new coronavirus patients.

The hospital said it is currently investigating how the coronavirus took root there.

Hospital officials set up an inquiry counter for the outbreak on April 8 after the first cases were confirmed.

They said the hospital has been inundated with inquiries from recently discharged patients, among others.

With its 173 beds, the hospital serves as a secondary facility providing emergency medical services to patients who need an operation or hospitalization in the capital, according to its website.

As of April 5, the hospital is no longer treating outpatients, accepting new patients or allowing visitors, the website said.