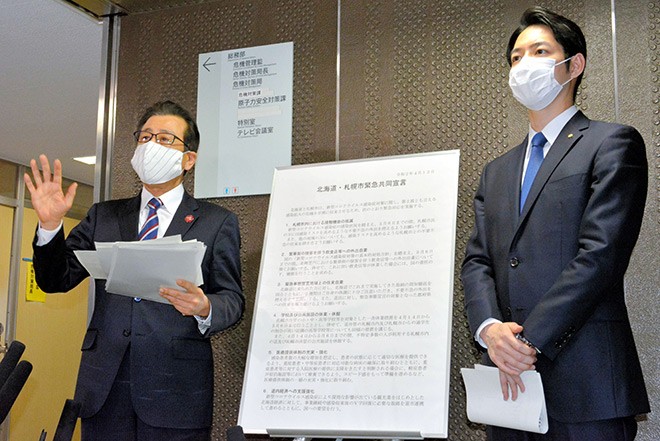 SAPPORO--Bracing for a “second wave” of the novel coronavirus, Hokkaido's governor and Sapporo's mayor declared a joint state of emergency from April 14 through the end of the Golden Week holidays on May 6.

All public schools in the capital of Hokkaido will be closed during the period.

A sudden spike in infections in the city prompted Hokkaido Governor Naomichi Suzuki and Sapporo Mayor Katsuhiro Akimoto to issue the order on April 12. The order marks the second time Japan's northernmost prefecture has declared a state of emergency over the novel coronavirus since February.

Hokkaido authorities also announced the decision to shut the schools, many of which had only reopened in early April after being closed from Feb. 28 under the first state of emergency.

On April 9 and 10, eight people tested positive each day for the virus in the city.

On April 11, 12 tested positive and 10 were confirmed infected there the next day.

“We need to do it to stop a second wave of infections at an early stage from spreading the virus,” Suzuki said, explaining why the leaders declared their own state of emergency, which is not based on the revised special measures law, instead of waiting for the central government to do so.

The two leaders asked residents to refrain from traveling in and out of Sapporo for nonessential purposes during the period.

Public facilities in Sapporo will also be closed under the joint state of emergency, which also implores residents not to visit bars and restaurants in nightlife districts such as Susukino.

Akimoto said he hopes the pre-emptive action will “stop the further spread of the virus in the city first, then the entire prefecture.”

Suzuki and Akimoto have urged the central government to compensate bars and restaurants that close to comply with the emergency declaration for lost earnings.

(This article was written by Toru Saito and Ichiro Matsuo.)