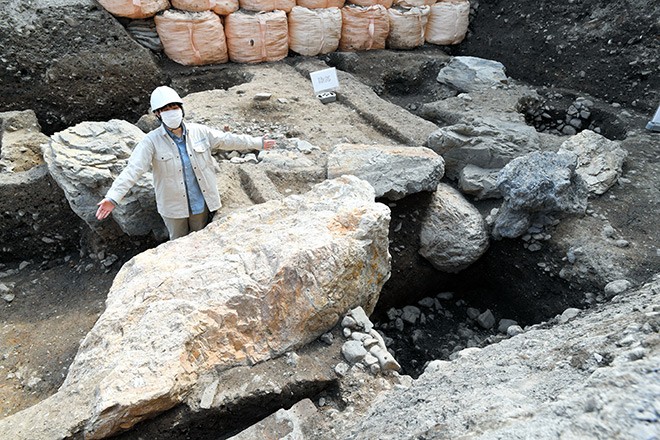 A massive stone is unearthed in the garden of the former residence of the Ashikaga Shogunate during the Muromachi Period (1336-1573). This photo was taken on April 3 in Kyoto’s Kamigyo Ward. (Kenta Sujino)

KYOTO--Massive garden stones, the largest of which weighs 9.8 tons, were excavated at the residence here of a shogunate family in the Muromachi Period (1336-1573), in what archaeologists believe was a demonstration of their immense power and influence.

The largest stone is nearly 3 meters long and one of eight, seven of which are situated around the site of a pond in the former residence of the Ashikaga Shogunate.

Experts said the unearthed stones, unusually huge compared with those found at other garden sites of ruling elites, were undoubtedly intended to show off the great power wielded by the shogun and his family.

The complex was completed in 1381 at the behest of Ashikaga Yoshimitsu (1358-1408), the third shogun of the Ashikaga Shogunate, and used as his and his successors' residence and headquarters.

The site is estimated to have spanned around 7,600 tsubo, or about half the size of the massive Tokyo Dome in the capital's Bunkyo Ward. One tsubo is equivalent to about 3.3 square meters.

The residence is also depicted in “Uesugi Rakuchu-Rakugai Zu” (Scenes in and Around the Capital), a national treasure. Kyoto in those days was the capital of Japan.

The eight stones were found in the southeastern part of the site and are deemed an especially important discovery.

They measure between 95 centimeters and 2.7 meters. Seven of them were situated close to each other.

The institute believes the stones were placed during the rule of the eighth Muromachi shogun, Ashikaga Yoshimasa (1436-1490), who also involved in constructing Kyoto's fabulous Ginkakuji temple (Silver Pavilion), based on an analysis of earthenware excavated from stratum in which they lay.

The residence is believed to have comprised a group of buildings in the north and a garden that centers around a pond in the south. During the excavation, researchers also found that the pond stretched at least 45 meters north to south and about 60 meters east to west.

“Ashikaga Yoshimasa until now hadn’t been held in particularly high regard for his political skills because he triggered the Onin War (1467-1477), which was followed by the Warring States period,” said Hisao Suzuki, a professor of archaeology and history of gardens at Kyoto Sangyo University. “This discovery shows that he excelled at fostering culture and engineering technology.”

The excavation was carried out from January through April 9 ahead of construction of a building. Due to the new coronavirus outbreak, the excavation site will be backfilled, and no on-site briefing session for the public will be held.