Cluster infections on the rise at hospitals, elderly care centers 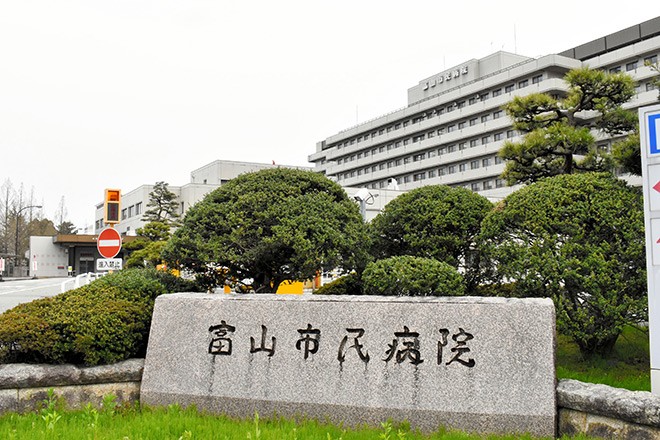 Toyama City Hospital in the capital of Toyama Prefecture has suspended treating outpatients until April 17, after 16 new coronavirus cases were confirmed. (Kazuhiro Takeda)

Many hospitals and service providers for the elderly across Japan have reported cluster infections of the novel coronavirus, raising concerns about the health and well-being of the most vulnerable populations.

In Kyoto, Horikawa Hospital in Kamigyo Ward confirmed between April 10-12 that nine nurses and patients were infected, according to the city government. Of these, one patient died.

The mass infections were apparently set off by a nurse in her 30s who tested positive for the virus on April 10. Later, two patients in her care--a woman in her 70s and another in her 80s--were found infected. The patient in her 70s died of acute respiratory failure on April 11.

When health officials tested individuals who had close contact with the nurse, they discovered more cases at the hospital on April 12: four patients in their 70s through 90s, a woman in her 60s who visited a patient and a nursing assistant in his 40s.

Horikawa Hospital posted a notice on its website that it will suspend treatment of outpatients--excluding artificial dialysis--and emergency medical services for the time being.

In Toyama, municipal officials reported 16 cases at Toyama City Hospital, which has been treating coronavirus patients as one of five facilities responding to infectious diseases in the prefecture.

They are two doctors, five nurses and nine patients. The first case discovered was a female nurse who tested positive on April 9.

The hospital is suspending treating outpatients for a week or so, starting April 13. It will not provide emergency care nor perform surgeries during that time, unless they are urgent or emergencies.

Miyoshi, a city in Hiroshima Prefecture, reported a cluster of cases at a day service center for the elderly.

Infections were confirmed in 20 elderly people, from the ages of 70 through 90s, at Day Service Center Suimei-en between April 11-12. The new cases were discovered after a woman in her 80s was confirmed infected on April 9. The center has suspended services.

Hiroshima Governor Hidehiko Yuzaki said this is the first cluster of infections in the prefecture. He added that none of the infected is seriously ill.