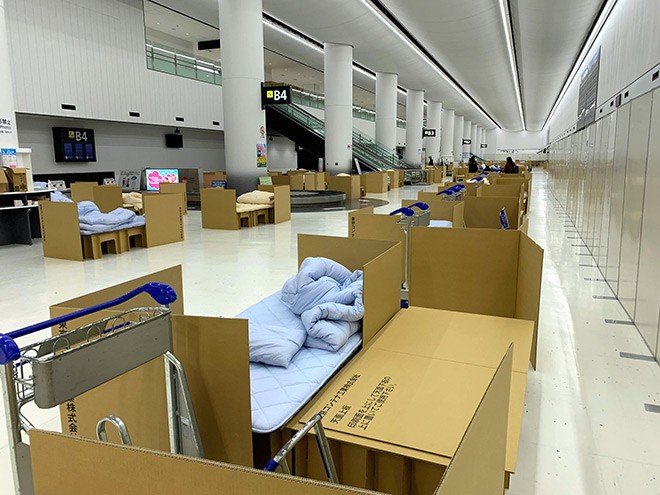 Cardboard beds are set up in a baggage claim section at Terminal 2 of Narita International Airport in Chiba Prefecture. (Provided by a reader)

The agony of waiting for the test results for the deadly new coronavirus is not the only ordeal facing those who arrive at Tokyo's Narita International Airport.

About 140 newly arrived passengers found themselves stranded in the airport’s Terminal 2 in Chiba Prefecture on April 8 and 9 with beds made from cardboard to lie on.

The central government had booked hotel rooms for them to stay in while awaiting the results of polymerase chain reaction (PCR) tests, but apparently there were not enough to accommodate them all.

According to the health ministry’s Narita Airport quarantine station, 1,500 or so cardboard beds were set up in the baggage claim section of the terminal, now temporarily closed.

Each bed, about the size of a tatami mat, or roughly 1.8 meters long and 900 centimeters wide, was placed about two meters apart, separated by partitions. A futon set of sheets and blanket was provided for each occupant.

Visitors and those returning from 73 countries and regions, including Japanese nationals, are required to undergo a PCR test at the airport.

It can take one to two days for the results to come back.

Officials allow those who can return home without using public transportation to wait at home until the test result confirms a negative reading.

Everybody else is required to stay at a hotel if a room is available.

The central government has booked a total of up to 300 to 400 rooms per day at two hotels adjacent to the airport.

But that is not sufficient on busy days when more than 1,000 people are taking the test.

An earlier lack of accommodation forced some people to sleep on chairs, wrapped in a blanket, in a facility near one of the runways.

In desperation, the government since April 7 began chartering aircraft from Narita to Chubu Central International Airport near Nagoya, central Japan, so people returning to Japan can stay at hotels near the airport in Aichi Prefecture.

But few people were willing to make such a long journey, prompting the health ministry to bring in makeshift cardboard beds.

The first time the beds were used was on the evening of April 8.

A man in his 20s, who comes from the Kansai region and now resides in Vietnam, said he was “taken aback” when he found he had to spend the night in one.

“But with not enough (hotel rooms) available, I thought I had no choice,” the man said.

Officials of the quarantine station have tried to shorten the wait time as much as possible by making the test processing for those who stay at hotels a priority.

But officials said that it seems likely more people will end up sleeping in cardboard beds.

“I don’t know if it’s OK to make people sleep like that in the terminal,” said an official who struggled to come to terms with the sleeping arrangements. “But we can’t (do anything) without a hotel room.”