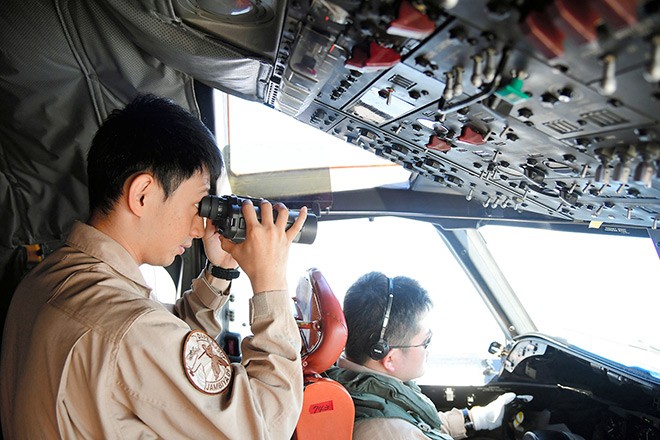 A member of the Self-Defense Forces monitors the sea aboard a P-3C aircraft. (Provided by the Defense Ministry)

The novel coronavirus pandemic is causing stress levels to soar among Maritime Self-Defense Force members who now appear stuck on overseas missions with little or no relief in sight, sources said.

One unit, comprising two P-3C patrol aircraft and about 60 MSDF members, was deployed to a temporary SDF base in Djibouti in East Africa in January for an international anti-piracy operation off Somalia.

The unit is also tasked with gathering intelligence to ensure the safety of vessels linked to Japan.

Under the original plan, a replacement unit was to arrive about every three months.

But the Defense Ministry now faces the possibility that it will be unable to replace the current unit in April because of complications arising from the pandemic, the ministry sources said.

The contagion is spreading in Djibouti, and the government there has restricted entry of foreign nationals.

In addition, the region is ill-prepared to fight the spread of the virus, and Japanese officials worry that MSDF members may not be able to receive adequate medical treatment in Djibouti if they become infected.

The spread of the virus could also disrupt local distribution networks and make it extremely difficult for the MSDF members to secure food supplies.

The Defense Ministry understands that it could be forced to temporarily withdraw the unit under these circumstances, the sources said.

In another MSDF mission, the destroyer Takanami with a crew of 200 has been in waters in the Middle East since late February, gathering intelligence to ensure safe passage of Japanese vessels.

The Takanami usually calls at a nearby port every seven to 10 days to replenish fuel and other supplies. Those calls give crew members a brief but welcome moment to disembark and relax on solid ground.

But now that the pandemic has spread throughout the Middle East, the MSDF members have had to remain on the destroyer as a precaution against infection. The crew is now “under great stress,” according to a senior SDF official.

Personal space is limited on the destroyer, and crew members have to use bunk beds or triple bunk beds.

Infection prevention is critical on the vessel. If just one crew member becomes infected with the coronavirus, it could cause a mass outbreak similar to the one that swept the Diamond Princess cruise ship when it was docked at Yokohama Port.

“I know it is frustrating, but they have to forgo the time to unwind on the ground for the time being,” the official said.

The MSDF plans to add Wi-Fi devices on the destroyer for smartphone-carrying crew members.

“They are thorough about washing their hands and disinfecting, but the challenge now is how to alleviate their stress,” MSDF Chief of Staff Hiroshi Yamamura said.

Defense Minister Taro Kono said he was weighing the options concerning the SDF mission off Somalia.

“It is an extremely difficult question,” he said at an April 3 meeting of the Lower House Security Committee.

Despite the constraints caused by the pandemic, it would be difficult for the MSDF to pull out of the area.

A senior SDF official involved in the deployment said Japan faces a tough balancing act because of the many factors that must be considered in the region.

The 10-year international effort to reduce piracy off Somalia has generated substantial results.

More than 200 pirate attacks had been reported annually at one point, but the number of cases has dropped to zero.

However, the root cause of piracy--the pervasive poverty caused by years of strife in Somalia--remains.

The spread of the coronavirus could exacerbate the struggle of impoverished people and tempt them to resort or return to piracy for a source of income.

Under that scenario, the MDSF mission would become even more vital to protect commercial vessels associated with Japan.

“Under any situation, we will remain prepared to carry out our task to protect the people and their security,” a notice sent to ministry employees said.

To prevent a breakdown, the ministry has adopted a two-shift system at the building.

But teleworking may be impossible for the many employees who deal with sensitive information on defense.

“Working from home is out of question because our work involves classified documents and data,” a ranking SDF official said. “We could end up being accused of simply taking (secrets) outside the ministry.”

A senior ministry official said the extent of work that can be done at home by Defense Ministry employees is limited, compared with their counterparts at other ministries and agencies.

Kono has taken a stance that “preventing the contagion has high priority even if working from home is less efficient.”

(This article was written by Yoshiaka Ito and Daizo Teramoto.)