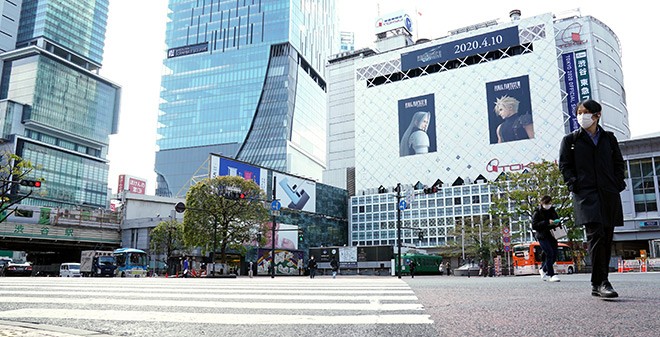 On April 11, the first Saturday after a state of emergency was declared, few pedestrians are seen at the Shibuya scramble crossing in front of JR Shibuya Station in Tokyo. (Ryo Kato)

JR Shibuya Station recorded a dramatic 90 percent drop in station users on the first Saturday following the April 7 state of emergency declaration due to the new coronavirus outbreak.

Huge drops in users were also seen at other major train stations in the Tokyo metropolitan area, according to data released by East Japan Railway Co. (JR East) on April 13.

The numbers show the major impact the announcement had on the usage of stations and trains.

In Shibuya Station on April 11, the number of users, excluding commuter pass holders, dropped by 90 percent compared to the previous week.

Even on weekdays between April 8 and 10, the number of station users dropped by 40 percent compared to the three days in the prior week.

At JR Tokyo, Shinjuku, Yokohama, Chiba and Omiya stations, the number fell between 33 and 49 percent on weekdays and 35 and 47 percent on April 11.

On the JR Yamanote Line during commuting hours, the number of riders for three days on weekdays after the state of emergency decreased 60 percent, compared to early February before people were asked to refrain from going out.

Even compared to the previous week before the state of emergency was declared, the number dropped 35 percent.

According to Tokyo Metro Co., ridership on its subway lines on April 11 and 12 decreased between 79 and 82 percent compared to the same period in 2019. The reduction percentage rose from the previous week.