VOX POPULI: C.W. Nicol’s Afan Woodland will live on despite his death at age 79 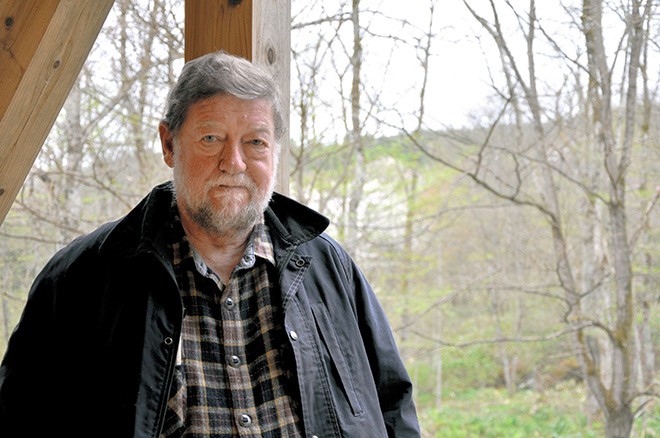 C.W. Nicol, a British writer and conservationist, in 2012 in the Afan woodland that he restored in the background (Asahi Shimbun file photo)

Had it not been for the novel coronavirus pandemic, the Olympic torch relay would have taken place in Nagano Prefecture during the first week of April.

One of the torch runner nominees was C.W. Nicol, who died on April 3 at age 79.

Born in Wales, Nicol was a sickly child. His grandmother encouraged him to go to the woods and ask the trees to make him strong. The young Nicol complied and started roaming the woods daily.

He also took up judo and karate, and became so fascinated with those martial arts that he visited Japan when he was 22.

But he could not get used to living in Tokyo with its frenetic pace and stagnant air.

He took a breather and went on a trip. When he stepped into a primeval beech forest, the dignity of the trees moved him to tears.

Nicol eventually took up residence at the foot of Mount Kurohime in the Shinshu region of Nagano Prefecture. He purchased woodland and named it Afan Woodland. The word "afan" is Welsh for "breezy valley."

Japan's forests, which were once extraordinarily beautiful, were reduced to a wasteland in many areas during the asset-inflated economy. Nicol became a vocal critic of the policies of the forestry agency and the Environment Ministry.

He acquired Japanese citizenship in his 50s, but took a dim view of Japanese society where citizens of all ages were turning their backs on nature.

Labeling them "Maigo no Japan-jin" (Lost Japanese) for being unable to find their direction, Nicol went so far as to state that, had he just arrived in Japan recently, he would never have sought Japanese citizenship.

My first encounter with Nicol was through his novel "Isana" (Whale). After hearing of his death, I reopened my old copy for the first time in years.

The story recounts the adventures of Kishu (present-day Wakayama Prefecture) whalers and delves into the heart of Japan's whaling culture. While working on this novel, Nicol lived in the traditional whaling town of Taiji in Wakayama.

As a familiar face in TV commercials, Nicol came across as a genial pro-Japanese author. But his views of Japan and its people were quite deep.

Nicol grew up in the woods, was moved to tears by the woods, and devoted his life to the woods.

He quietly went home to his Afan Woodland.