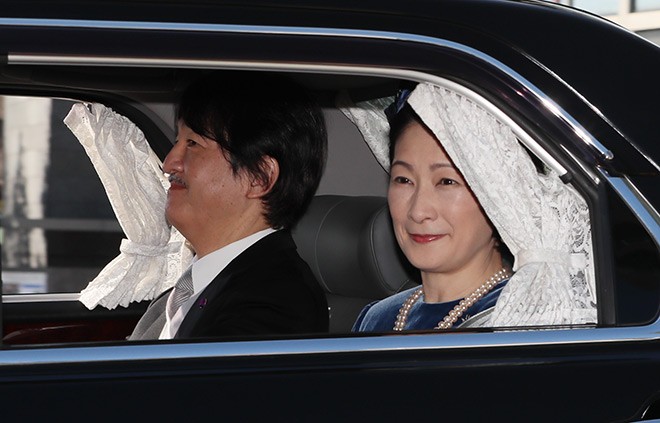 April 19 ceremonies to proclaim Crown Prince Fumihito’s rise as heir to the Chrysanthemum Throne have been put on hold due to the new coronavirus pandemic.

Chief Cabinet Secretary Yoshihide Suga announced the delay on April 14 after the government decided early in the day that the event at the Imperial Palace would not go ahead as scheduled.

Suga made no mention of a rescheduled date for the Rikkoshi no Rei ceremonies, saying the government had only just decided on the delay and is still grappling to contain the virus.

Prime Minister Shinzo Abe declared a state of emergency for Tokyo and six prefectures including urban centers on April 7 to stem the outbreak.

No new dates for the ceremonies will be considered until the government is confident the pandemic is under control, according to a senior Abe administration official.

“It would be embarrassing if we were forced to reschedule again,” the official said.

The postponement also delays discussion by experts over how to ensure a stable imperial succession.

The government had been preparing to hold discussions on the issue after the proclamation events.

A supplementary resolution of a 2017 one-time law to allow Emperor Akihito’s abdication calls for a government report to be submitted promptly to the Diet about ways to ensure a stable imperial succession, including possible establishment of imperial female family branches.

The matter carries significant weight for the future of the imperial family.

But Naruhito’s daughter, Aiko, his only child, is not permitted to inherit the throne under the Imperial House Law, which allows only male emperors, making his younger brother Fumihito next in line. Fumihito's 13-year-old son Hisahito would follow him.

Hisahito is the only male among Emperor Emeritus Akihito’s grandchildren.

More than 70 percent of Japanese favor changing the rule to permit a female emperor or matrilineal emperor, according to an Asahi Shimbun survey last spring.

But most Abe supporters are conservatives who back a male-only line, putting the prime minister in a bind between mainstream public opinion and his base.