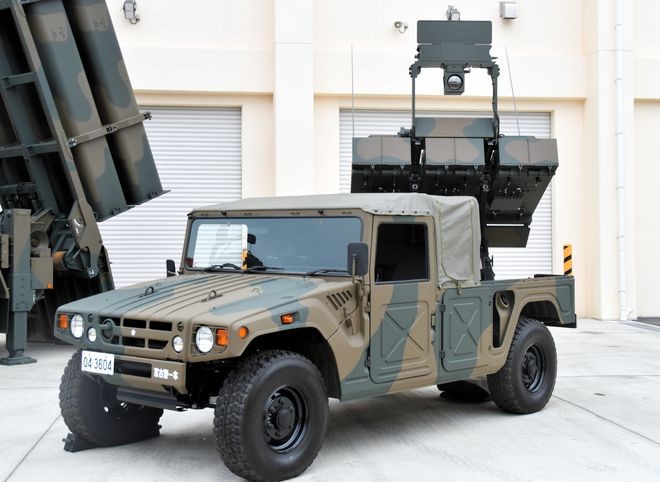 A multipurpose medium-range missile launcher at the Ground Self-Defense Force’s Camp Miyakojima in Okinawa Prefecture on April 5. All missiles have been removed from Miyakojima island. (Shinichi Fujiwara)

MIYAKOJIMA, Okinawa Prefecture--For all of Japan's high-touted preparations to defend remote territory from invasion, the situation on Miyakojima island here illustrates how woefully ill-prepared the Ground Self-Defense Force is in dealing with a crisis.

The GSDF has a camp set up, but it doesn't have any missiles or ammunition depots yet.

At a ceremony held April 5 to mark the completion of the deployment of GSDF personnel at Camp Miyakojima, Commander Shinji Sato pledged, “We, as a unit stationed on the forefront line of defense, will quickly cope with any emergency operations.”

The base opened in March last year with 380 GSDF members of a guard unit stationed there as an initial step. A missile unit was later added to counter enemy vessels and aircraft, increasing the number of personnel to 700.

Chinese vessels and aircraft have routinely entered or flown over the Miyako Strait between Okinawa Prefecture's main island and Miyakojima since 2008, prompting the Japanese government to decide to station an SDF contingent there.

It views the southwestern waters as a blank area in security under National Defense Program Guidelines approved by the Cabinet in 2010.

It was envisaged that missile units would be introduced to Miyakojima, Ishigakijima and the Amami-Oshima islands as Chinese vessels and aircraft use those areas to reach the Pacific, while a coast monitoring corps was eyed on Okinawa's Yonagunijima, Japan's westernmost island.

It took 10 years to set up a missile unit on Miyakojima, after new military facilities were established on Yonagunijima and Amami-Oshima.

Camp Miyakojima is situated in a central part of the island so land-to-ship and surface-to-air missiles used by the unit can be stored at an ammunition depot newly installed in an area that is home to few residences.

But the missiles have yet to arrive in Miyakojima and the ammunition chamber has not been constructed, which has fueled growing distrust by residents toward the government.

At a briefing session for local residents, the Defense Ministry initially said only that “rifle shots, smoke pots and other such weapons”to be used by the guard unit will be stored at the camp, despite plans to station multipurpose medium-range missiles, 81-millimeter trench mortars and other powerful weaponry.

After the Tokyo Shimbun newspaper reported on the SDF’s plan in April last year, even residents favorably disposed to the unit's deployment due to the accrued economic benefits it would entail, started voicing their opposition.

The defense minister at the time, Takeshi Iwaya, was forced to issue an apology for the government's “insufficient explanation.”

As a result, trench mortar shells and other weapons already stored in Miyakojima were temporarily removed from the island.

Opposition from residents also led to a delay in the construction of the munitions storehouse that should have otherwise been operational from this spring.

Noriko Shimajiri, 69, a grocery store owner who lives near the planned site of the ammunition depot, summed up the feelings of local residents by saying: “Few people publicly voice their opposition, but almost all of the residents harbor a sense of mistrust over the government’s way of doing things. They are all very anxious."

Under current plans, the ammunition depot is scheduled for completion by the end of fiscal 2020. And herein lies another problem: The facility will be located 10 kilometers from the camp.

That means servicemen will have to go all that way in case of an emergency.

Commander Sato described the distance as “not so far” and stressed that the GSDF will develop “plans to put a system in place to ensure quick responses."

But Kazuhisa Ogawa, a specially appointed professor of security policy at the University of Shizuoka, called the plan “extremely sloppy.”

“That is like a police officer not carrying a handgun at waist level," Ogawa said. "Think about it. The unit is regarded as vitally important in filling the blank in security and disaster management.”

The Defense Ministry’s slipshod approach triggered a new wave of protests from residents after the local Akita Sakigake Shimpo newspaper revealed that insufficient measurements were carried out in screening candidate sites for the Aegis Ashore land-based missile defense system.

Ogawa said the government should be held to task over the massive blunders.

“They arose from the same root,” Ogawa said. “I must say the government's attitude reeks of a lack of responsibility toward residents living nearby and the SDF members assigned to operate the system.”