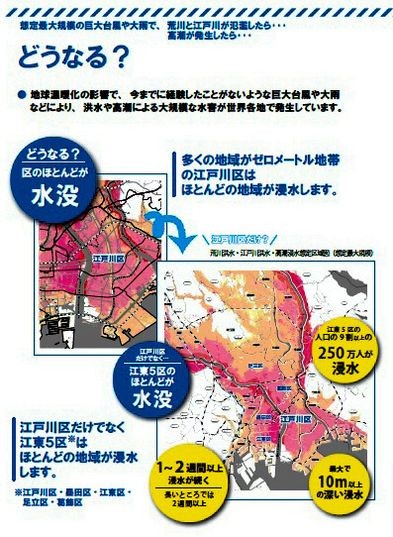 Half a year has passed since Typhoon No. 19 devastated wide areas, mainly in eastern Japan, leaving some 100 people dead or missing.

On April 13, a heavy rainstorm created by a strong low-pressure system struck many parts of the nation, forcing authorities in Chiba Prefecture to issue an evacuation advisory.

The current desperate fight to control the new coronavirus outbreak offers no excuse for delaying efforts to better prepare the nation for natural disasters.

One lesson from the damage caused by the destructive typhoon that hit Japan in October last year is the need to improve hazard maps that visualize projected data for natural hazards.

Hazard maps should serve as a basic guide for local residents’ actions to protect themselves during natural disasters.

But an increasing frequency of exceptionally heavy rain in recent years has led to many cases of unexpectedly severe damage suffered by areas not covered by flood hazard maps.

One key problem that has come to the fore is that many areas along small and midsize rivers were flooded. Typhoon No. 19 caused breaches in the embankments of 71 rivers, of which 43, or about 60 percent, were relatively small rivers, according to the land ministry.

Such rivers are not monitored well, mostly devoid of such equipment as cameras to observe water levels. In many of these cases, local governments remained unaware of what was happening for some time while dangerous developments such as breaches of embankments or overflowing water were occurring.

But many areas along smaller rivers are not covered by hazard maps because graphics showing accurate flood hazards and risk data are not available for such areas.

In response to the damage caused by Typhoon No. 19, the land ministry set up a technical task force for flood hazard assessment and mapping. The task force is expected to produce guidelines by June for prefectural governments to designate hazardous areas.

There is another significant flaw in existing flood hazard maps that needs to be corrected.

They do not show areas that could suffer from inland flooding, which occurs when an area’s drainage infrastructure is overwhelmed by unusually heavy rain.

This type of flooding, which is also called urban flooding, occurred in 144 municipalities in 15 prefectures during Typhoon No. 19, causing more than 10,000 houses to be submerged, according to the ministry.

In many cases, long hours of a ferocious rainstorm dumped so much rain in urban areas that water levels in rivers rose sharply, overwhelming sewerage systems or clogging sewerage pipes with driftwood.

A high-rise condominium in Kawasaki was left without power for days after its underground electrical system was flooded.

Such a situation could occur in any area with certain geographical conditions, experts warn.

Some local governments that have experienced highly damaging flooding have published inland flooding hazard maps in addition to ordinary flood hazard maps related to rivers. But they are still in the minority.

Municipal governments that have not experienced such flooding yet should also identify and assess urban flooding hazards and risks and develop maps showing them, if necessary.

Local governments could start by quickly studying and producing a makeshift hazard map to alert local residents to possible flood hazards and risks in their areas as soon as possible.

Every possible effort should be made to minimize flood damage. Tackling this challenge requires effective cooperation between the central and local governments.