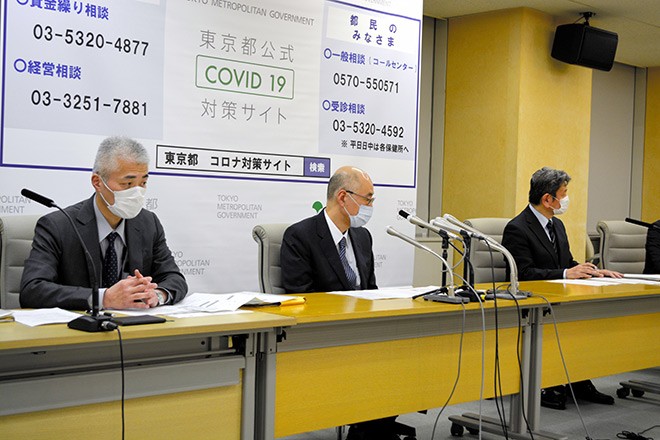 Officials from the Tokyo Metropolitan Bokutoh Hospital and the Tokyo metropolitan government hold a news conference on April 14. (Yusuke Nagano)

Japan added 548 cases of people infected with the new coronavirus on April 15, pushing the case total to 9,441.

The figure continues to rapidly tick upward as corporations, nursing homes, hospitals and social welfare facilities report clusters of infections, as the virus multiplies throughout the country’s institutions.

The count is accurate as of 10:30 p.m. on April 15. The total includes those aboard the quarantined Diamond Princess cruise ship in Yokohama Port and passengers who underwent quarantine procedures at airports.

The total number of deaths in Japan from the coronavirus has meanwhile climbed to 192.

Eighteen new deaths were confirmed across Japan, including six deaths in Tokyo alone, which had the most of anywhere.

Of those, Nara, Shiga and Kochi prefectures each confirmed their first death from the coronavirus.

One infected passenger who had been aboard the Diamond Princess cruise ship died.

Breaking down Japan's 548 new cases of coronavirus by prefecture, Tokyo confirmed 127 cases of COVID-19, the most of anywhere, followed by Osaka Prefecture with 74.

The Tokyo Metropolitan Bokutoh Hospital in Sumida Ward newly confirmed infections among one patient and two female employees, and in total confirmed seven cases so far.

Saitama and Hokkaido prefectures each posted record highs for a single day, at 61 and 23 new cases, respectively.

The Hiroshima prefectural government confirmed infections in 11 residents and seven staff at a social welfare facility. According to Social Welfare Juridical Person Jungenkai, which manages a number of facilities, 40 people--28 residents and 12 staff--tested positive at Kenshin Gakuen, a residential facility for people with intellectual disabilities.

Gunma Prefecture saw 10 new cases, nine of them associated with the nursing home Towanosono in Isesaki. That facility had a confirmed total of 45 cases as of April 14.

In Shiga Prefecture, a man in his 40s in Otsu tested positive for the virus. The man is an employee at electronic parts manufacturer Nichicon Kusatsu Corp. in Kusatsu, where a group infection was reported. The total number of confirmed cases there is 17, which includes company personnel and their families.