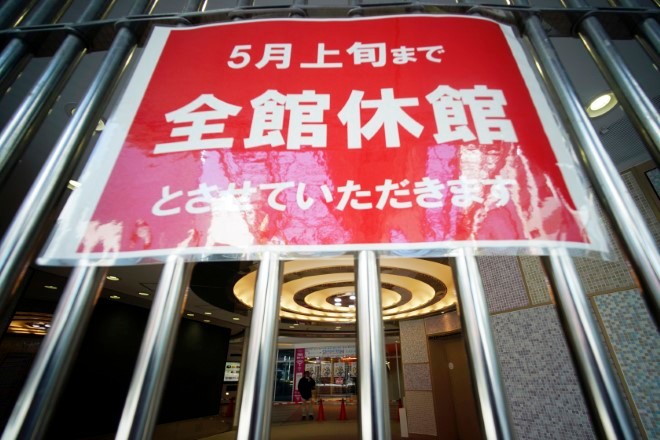 A man passes a department store notice of temporarily closure on April 14 in Tokyo. (AP Photo)

Japan on Friday said it hope to start distributing coronavirus relief payments next month, after extending a state of emergency nationwide and amid criticism that its response to the crisis has been slow and insufficient.

With more than 9,000 infections and nearly 200 deaths nationally, Prime Minister Shinzo Abe said on Thursday the government was considering cash payouts of 100,000 yen ($928.42) for all, in an effort to cushion the economic impact.

Abe, who has seen his support hit by his handling of the outbreak, is due to hold a news conference at 6 p.m. (0900 GMT).

“We think the most important thing is to proceed with this speedily,” Finance Minister Taro Aso said of the cash payout, adding the government hoped to get payments started in May.

The government’s supplementary budget set out payouts of 300,000 yen to households whose incomes have been hit by the outbreak. But pressure mounted on Abe, including from within his party, to increase the help with a payment of 100,000 yen to all citizens.

The ruling party would discuss how to source the cash payments, the chief Cabinet secretary said.

Abe imposed the state of emergency on main population centers, including Tokyo, from April 7 but he expanded it to the entire country on Thursday.

The Cabinet Office also reported another official had tested positive for the coronavirus, becoming the third case in the office.

The infected man, who was not identified, is in his 50s who works on the council for science, technology and innovation. He was confirmed with the coronavirus on Thursday, an official said.

The Cabinet Office, a government ministry, assists the Cabinet with policy coordination. Two other officials who had come within 2 meters of the man were now staying at home, the office said.

Both had yet to be tested for the virus. Public health centers in their towns would decide depending on their conditions, it said.

No ministers had been in close contact, generally meaning within 2 meters distance, with him since he developed symptoms on April 10, the official said.

Under Japan’s state of emergency, municipalities are urging people to stay inside, but without punitive measures or legal force.