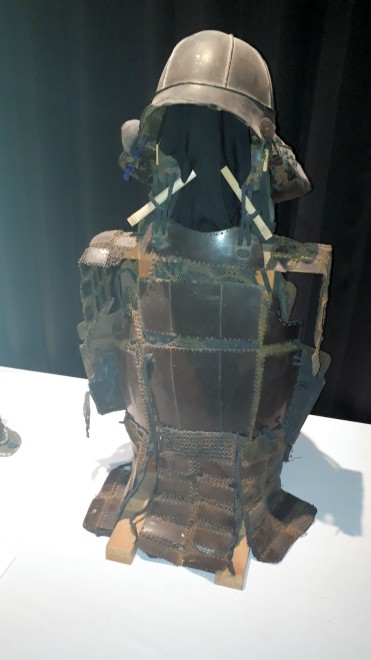 A "kacchu" suit of armor associated with the Momochi family is put on display at the Akame Natural History Museum in the Akamecho-Nagasaka district of Nabari, Mie Prefecture. (Takumi Fujii)

The event is part of efforts by the museum situated near the entrance to the famed Akame 48 Waterfalls to raise the profile of the picturesque site previously known as a ninja training ground and introduce the nature-rich environment of the region to visitors.

A "kacchu" suit of armor and a "kusari-katabira" mail armor associated with the Momochi family, one of the three “jonin” major ninja clans in what was once called Iga province, are among 46 historical artifacts from the personal collection of Masaru Ueda displayed in the second floor special exhibition room.

"Makibishi" caltrops and a gun hidden in a hollowed-out case are also featured in the collection of the 82-year-old former city official.

"I preserved them to keep them from being scattered and lost. I hope visitors take a close look at them," Ueda said at the exhibition’s March 28 opening ceremony.

Nabari Mayor Toshikatsu Kamei, also in attendance, said he hoped the museum would promote the charms (of the Akame area) "not just in Japan, but also worldwide."

Everyday items from the time when the feudal-era spies were active are also on display that offer insight into how they lived.

Ueda entrusted the museum with about 450 historical items. Due to the volume and space constraints, the museum said it will rotate items in and out during the exhibition, which runs through June 14.

The nonprofit Akame 48 Waterfalls Association recently remodeled the museum’s visitor center and added exhibition rooms and other spaces using subsidies from the city government to promote the area internationally.

"We think of the museum as the core of the surrounding natural environment and landscapes,” said association member Shigeki Masuda.

The permanent exhibition room on the first floor showcases the Akame Gorge’s nature and wildlife. The Japanese giant salamander and other creatures and plants are featured in explanatory panels and digital displays that also inform visitors about the area’s geographical features, history and other details.

Admission to the museum is free. An entrance fee is required for visitors elementary school age or older to go to the gorge.