Japan finally allowed inside U.S. base to check harmful leak 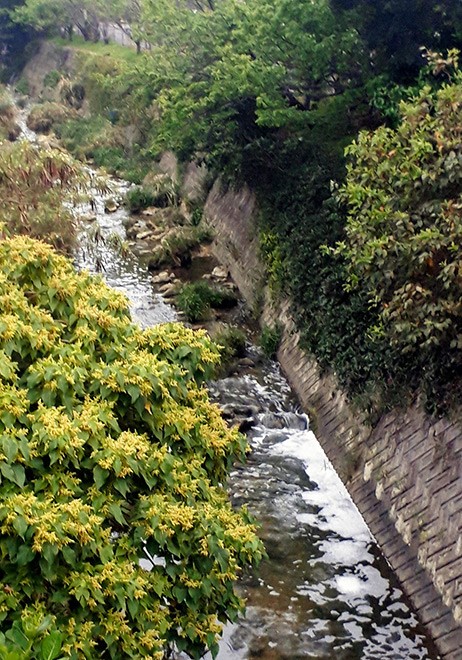 Foam is still visible in this river near the U.S. Marine Corps Air Station Futenma on April 11, a day after firefighting foam leaked from the base. (Mika Kuniyoshi)

U.S. authorities at a military base in Okinawa Prefecture took the unprecedented step of allowing central government officials their first on-site investigation into the leakage of carcinogenic organic substances. But the move did not go off without controversy.

Firefighting foam leaked from equipment kept at the U.S. Marine Corps Air Station Futenma in the city of Ginowan on April 10, causing an estimated 144,000 liters of the substance to flow outside of the base into a river.

Firefighting foam typically contains Perfluorooctane Sulfonate (PFOS). Japan has banned the production, importation and use of PFOS since 2010.

On April 16, six officials affiliated with the Defense Ministry, Foreign Ministry and Environment Ministry, all based in Okinawa, were allowed inside the Futenma base to check on how the firefighting foam leaked.

The investigation was conducted under provisions of an environmental supplementary agreement to the Japan-U.S. Status of Forces Agreement.

The supplementary agreement took effect from 2015, but this is the first instance it was actually invoked to allow Japanese officials to check on environmental problems at a U.S. military base.

The six officials spent about 90 minutes looking into how the firefighting foam had leaked and what effect that had on the surrounding area. U.S. officials also explained how firefighting foam is normally stored as well as how it leaked outside the base.

Kono said U.S. officials were continuing to look into how the leak occurred, but added there were likely multiple factors involved, including the fact that the door to the storage facility was left open.

“We hope to continue to conduct investigations as the need arises,” Kono said.

But he was forced to apologize later on April 17 after it emerged that neither the Okinawa prefectural nor Ginowan municipal governments had been contacted to join the investigation.

Those two local governments had long petitioned U.S. military authorities to permit access under the terms of the supplementary agreement.

Kono met with reporters later on April 17 and conceded the ministry had erred in not contacting local officials.

Central government officials were in the process of rectifying the situation with another on-site investigation planned for the coming week.

The problem of PFOS contamination has plagued not only Okinawa but also other areas in Japan where U.S. military bases are located. The Tokyo metropolitan government has found high levels of PFOS and Perfluorooctanoic Acid (PFOA) in a well in the vicinity of Yokota Air Base in western Tokyo.