Patients with mild symptoms under ‘house arrest’ at hotel 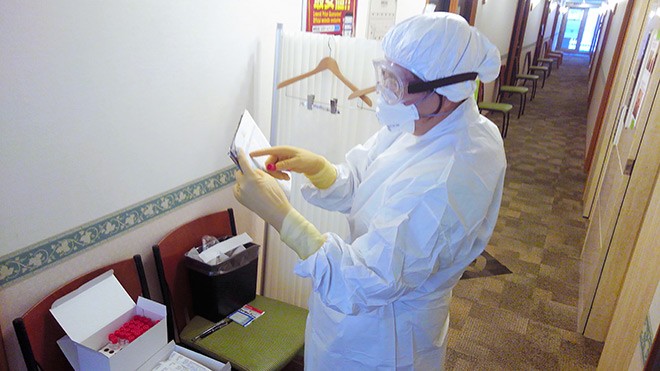 A worker prepares a test to detect the new coronavirus at a Toyoko Inn hotel near Tokyo Station. (Provided by the Tokyo Medical Association)

At Toyoko Inn near Tokyo Station, the guests these days are not the typical mixed bag of business travelers and tourists.

Instead, the hotel is filled with coronavirus patients with mild or no symptoms who are effectively under "house arrest" and barred from contact with each other as a precaution.

“Some of the patients were upset to find little difference between life at the hotel and being hospitalized when their expectations were to have more freedom,” said a staff worker.

Ten days after the Tokyo metropolitan government began the program to isolate new coronavirus carriers at a hotel, a group of health professionals are monitoring their condition around the clock.

More patients are expected to be sheltered in such facilities as the number of confirmed cases continue to surge this month.

At Toyoko Inn on a recent day, chairs were placed some distance apart from each other in an empty corridor.

People staying in this hotel are seated every day at a designated time to be tested for the virus.

The hotel, part of a nationwide business hotel chain, is the first facility that the metropolitan government opened in the capital for patients in response to a spike in cases.

Converting a hotel into a makeshift hospital was aimed at saving beds for those with serious conditions by averting a situation where medical facilities are overwhelmed with virus patients.

Patients who are admitted to the hotel are limited to those with mild or no symptoms, who are not elderly and have no underlying health issues.

The way they pass the time varies from patient to patient.

“Some are constantly concerned about their partners being hospitalized, others are deep into reading and still others watch movies for a change,” the staff worker said. “Many young people are totally absorbed in hand-held games.”

As of April 14, 83 were staying in the hotel, including an elementary school student.

The Tokyo Medical Association, a group of doctors, is sending health professionals to the hotel to monitor patients.

A team of a doctor, two nurses and metropolitan employees are available from 8:30 a.m. to 5:30 p.m. daily on a shift. For the rest of the day, two nurses are stationed there around the clock.

When an emergency occurs at night, doctors at metropolitan hospitals are assigned to respond.

Taketomo Omomo, deputy director at Heisei Tateishi Hospital in Katsushika Ward, plays a leading role in the deployment of medical staff to the hotel.

He said those staying at the hotel are each given a thermometer.

Nurses and metropolitan employees call the patients in their rooms in the morning and evening daily to check their temperature and state of their health.

Only doctors see patients in person.

Virus tests are conducted either in the morning or in the afternoon. A doctor interviews those complaining  of illness for about five minutes each.

On April 14, 12 patients were interviewed.

Patients are allowed to leave the hotel if they are deemed virus-free after they have tested negative twice in tests 24 hours apart.

Three or four are discharged from the hotel a day at most.

Some of the hotel occupants stay there while they wait for their test results. As soon as they test negative, they can leave immediately.

But a few of those who were moved to the hotel from a hospital were returned to the medical facility after suffering from a fever 37.5 degrees and above, coughing and vomiting for some time as of April 14.

Even if a room was emptied after its occupant was cleared to leave, the hospital will not allow a new patient to immediately occupy it.

If other patients remain on the same floor, there is a risk of exposing janitors who are cleaning up to the virus.

So, an entire floor is cleaned and disinfected to prepare for new patients only after all the occupants there have left.

The hotel provides three bento packed meals a day, which are placed on the first floor at a space separated from the rest.

Through a public address system, a worker announces the arrival of meals. Patients staying on the same floor are asked to come down to pick up their bentos to be followed by others on a separate floor.

Staff workers monitor the health of patients, such as if they can walk, through a surveillance camera there.

Doctors and metropolitan employees also have the same meals as patients.

Doctors shield themselves against the virus with N95 respirators, nonwoven gowns, protective goggles and caps.

But the risks of contracting the virus cannot be completely eliminated.

Otomo, a specialist in disaster emergency care, was involved in the treatment of returnees airlifted from Wuhan, a Chinese city where the outbreak began, on chartered aircraft and of those who were aboard the virus-struck Diamond Princess cruise ship.

He expressed confidence in navigating the novel coronavirus program to success.

“In emergency care, we are forced to respond to patients with few details about the background of their injuries or illness,” Otomo said. “Our response to the new coronavirus is nothing out of the usual.”

The metropolitan government will continue to shelter the infected with mild symptoms at more hotels.