Starry night sky above Antarctica filled with dance of the aurora 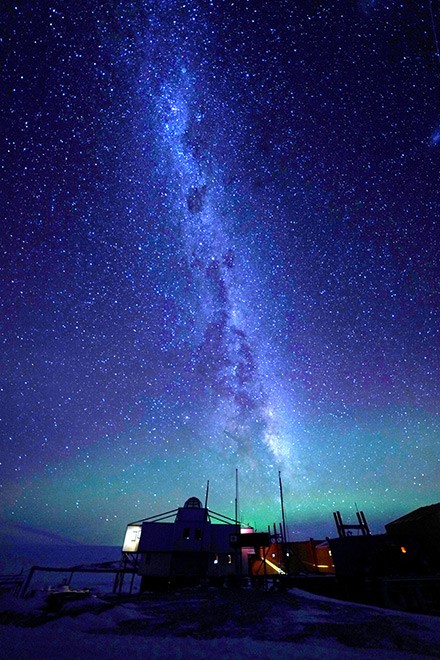 Flickering lights of an aurora color the Milky Way stretching toward the zenith above Syowa Station in Antarctica on April 19. (Yumi Nakayama)

SYOWA STATION, Antarctica--One week ago, a blizzard whipped through here, bringing with it many days of strong winds and snowstorms.

After the storms, a brilliant star-filled night sky appeared on April 19.

Around 9 p.m., with the temperature a chilly minus 14.5 degrees and the winds dying down, the dancing glow of an aurora colored the Milky Way, stretching all the way to the zenith.

The curtains of the base buildings were closed so as not to let any light leak out and disturb the viewing of the aurora. Here, the night sky is pitch black, making the stars shine with even more intensity.

A member of the wintering party watching the aurora said to other members via a wireless device, “The starry night is beautiful.”

Soon, other members donned their thick jackets and headed outside. They mounted a camera onto a tripod and filmed the eerie spectacle until late at night.