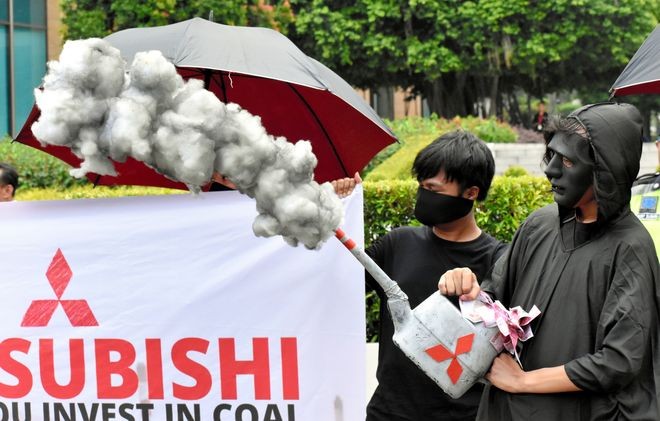 Protesters gather in front of the building housing the Jakarta base of Mitsubishi Corp. to oppose the company's support for a coal-fired thermal power plant. (Rizki Akbar)

Developments in December stunned Japanese officials involved in coal-fired thermal power plants but also led to a glimmer of hope that Japan is becoming more concerned about environmental damage abroad.

Foreign companies and financial institutions on Dec. 17 announced their withdrawal from a thermal power plant project in Vietnam that had been pushed mainly by Japanese interests.

Standard Chartered PLC of Britain issued a statement saying that “it will withdraw from three projects that it had agreed to fund before this prohibition (on direct financing for new coal-fired power plants),” as part of efforts to deal with global warming.

The Vung Ang 2 plant project in Vietnam, with an estimated cost of $2.2 billion (about 240 billion yen) and expected power output of 1.2 gigawatts, is seeking to start operations in 2024.

But with other foreign companies making similar announcements, it seemed at one point that Japanese companies would be the only ones involved.

Even with the most advanced technology, coal-fired plants are considered a major culprit for global warming since they emit twice as much carbon dioxide as plants running on natural gas.

Japan has increasingly been the target of international criticism because it continues to provide government funding for exports of such plants.

In its basic energy plan compiled in 2018, the Japanese government laid out four conditions for providing government funding to plant exports. One condition is that the host nation must ask Japan for its most advanced technology that emits lower levels of carbon dioxide.

Despite the conditions, exports of plant technology continue through the initiative of equipment manufacturers and the Ministry of Economy, Trade and Industry.

But there are signs that Japan may change its stance.

At a January news conference, Environment Minister Shinjiro Koizumi raised concerns about the Vung Ang 2 project on grounds the four conditions were not being met, including the one about the request for Japan’s most advanced technology.

However, the companies handling construction of the plant as well as the equipment and materials used there will be Chinese and American ones.

Koizumi touched upon a weak point of the four conditions that would normally be expected to limit such exports. However, the conditions have, in fact, been functioning as a free pass.

Under Koizumi’s leadership, a panel of experts met for the first time in April to consider a review of the four conditions for thermal plant export assistance.

The environment minister insisted that it was only to be expected that stricter conditions be put in place.

Koizumi’s efforts may have been an attempt to recover his standing from the international criticism he experienced at international forums last year, including the Climate Action Summit held at U.N. headquarters. Koizumi tried to push for stricter conditions for government funding, but his attempt was thwarted by the prime minister’s office.

Meanwhile, protests against Japan’s actions continue around the world.

On March 3, a dozen or so protesters from environmental nongovernmental organizations (NGOs) and other groups gathered in front of a building in Jakarta housing the local representative office of Mitsubishi Corp.

They held up a banner with a photo of people wearing gas masks and the wording, “When you invest in coal, this is your return. Get out of Vung Ang2!”

Similar protests were held the same day in Japan, the United States, Australia and the Philippines.

However, there were also signs of change within Japan.

Mitsubishi UFJ Financial Group Inc. made a similar announcement last year, so Japan’s three megabanks are now in step in their efforts to “decarbonaize.”

PROTESTS BY THOSE WHOSE LIVES ARE BEING THREATENED

Residents in areas where Japan has exported coal-fired plant technology are suffering from the environmental effects as well as the destruction of their daily lives.

The company plans to expand the facility by constructing a new plant on neighboring farmland.

The Japan International Cooperation Agency (JICA) has provided assistance for the basic design of the expansion project.

In mid-March, rice farmers had completed their planting and were growing corn, chili peppers and purple onions in adjoining plots.

Farmers work on fields they rent from landowners. But almost all of the landowners have agreed to have their property expropriated so plant construction can begin.

One farmer, Rodi, 59, said, “If I am forced to leave this area after construction begins, I don’t know what I can do besides farming.”

“If the plant is constructed after the Japanese government continues with its assistance, we will face a tragic situation,” he said. “I ask that the assistance be discontinued.”

Surmi, 48, who works the fields in the area every day along with her husband, said, “We will lose our livelihood.” She explained that the compensation money paid out in connection with the planned construction went completely toward buying seedlings and seeds for next year’s crop.

Cirebon regency, also in West Java province, is another area where residents have been deeply affected by their proximity to a coal-fired plant.

The area is known for fishing and salt farms. But some residents have had their salt farms expropriated for the project.

In addition, the salt farms have been polluted by dust from coal delivered to the plant, and the volume of fish caught has plummeted.

The No. 1 plant began operations in 2012 and construction is progressing on the No. 2 plant. Among the entities involved in the project are the government-owned Japan Bank for International Cooperation (JBIC), three Japanese megabanks and major trading company Marubeni Corp.

Sarjum, 41, is a fisherman whose catch plunged after the No. 1 plant was constructed along the coast. With his life turned upside down, he has participated in protests against further construction.

“Japan does not even try to respond to our voices of opposition” he said in anger.

Coal-fired thermal plants provide about 61 percent of Indonesia’s total electricity. There are plans to construct more such plants, and many of the projects involve participation by Japanese entities.

At the Jakarta demonstration, protesters argued that new construction of coal-fired plants will further accelerate climate change, and that Mitsubishi should provide assistance for renewable energy sources in Southeast Asia.

INVESTORS MOVING SWIFTLY AWAY FROM COAL

According to the International Energy Agency, coal-fired thermal plants generate about 40 percent of the world’s electricity. But such plants are the energy source that produces 30 percent of carbon dioxide emissions, a major cause of global warming.

About 90 percent of coal-fired thermal plants constructed over the past two decades are in Asia.

Japan has continued to boast that it has realized the highest efficiency in the world in its thermal plants. It is the only member of the Group of Seven that continues to construct new plants both domestically and abroad.

One study by an environmental NGO found that Japan has started operating 15 coal-fired thermal plants since 2012, construction continues on an additional 22, and there are no plans to stop such construction.

Gregory Trencher, an associate professor at Tohoku University who specializes in energy policy, said a “multitude of different factors” account for why Japan continues to push coal.

Those include an energy policy centered on the import of fossil fuels, confidence in its clean coal technology and the continued operations of equipment manufacturers.

But Trencher said the fundamental cause may be the culture of the Kasumigaseki district in Tokyo, where many central government ministries are located, that “does not desire any major policy change that would involve rejecting past policy.”

And while Koizumi did raise questions about the Vung Ang 2 project in January, the following month he abruptly changed his stance and indicated he would allow the project to proceed.

Analysts view that switch as a strategic move by Koizumi to offer a concession to the economy ministry in exchange for its consent to review the four conditions used in deciding on government funding for thermal plant exports.

Meanwhile, investors are rapidly moving away from coal.

According to an environmental NGO, about 1,200 institutional investors have made known they will no longer invest in power plants using fossil fuels. Those investors control total assets of about $14 trillion (about 150 trillion yen).

In Japan, major trading companies, such as Mitsubishi and Marubeni, last year announced they would in principle cancel participation in new coal-fired thermal plant construction.

The three megabanks have now all taken a similar stance.

But such companies have not come out completely for decarbonization as they have left open loopholes by saying they would remain in projects for which assistance has been approved.

One source with a financial institution said, “While we cannot immediately say we will end such projects as long as the government does not change its policy, a time will come in the not too distant future when such a policy change will have to be made.”

***
This story is part of Covering Climate Now, a global collaboration of about 400 news outlets, including The Asahi Shimbun, to strengthen coverage of the climate story. The campaign was begun in April 2019 by The Nation, a weekly magazine in the United States, and the Columbia Journalism Review out of a sense that media organizations had to change now as the world faced the crisis of global warming.