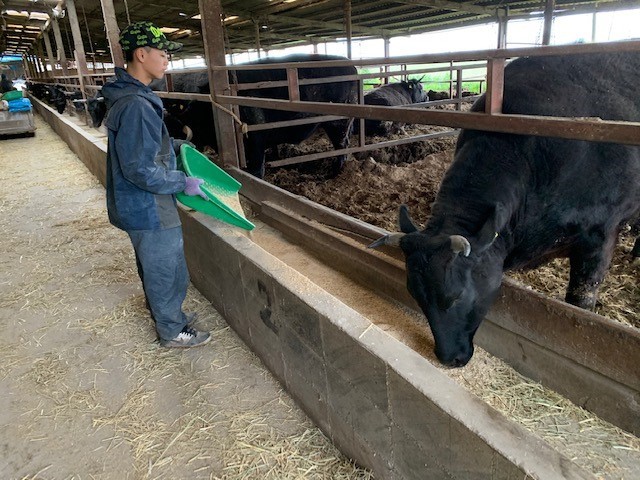 The new coronavirus pandemic has produced a double whammy of dwindling demand and labor shortages for Japan’s cattle farmers, and some say long-term government assistance is needed for the industry to survive.

Prices of premium wagyu beef and other luxury farm products, such as melons, have plummeted since the health crisis started.

Travel restrictions have kept out overseas tourists, who had fueled demand for Japan’s high-quality beef, as well as foreign technical interns who were expected to work in the labor-depleted agriculture industry.

Mutsuo Suzuki, a cattle breeder and farmer who raises 480 beef cattle in Omihachiman, Shiga Prefecture, is one of the many ranchers rattled by the pandemic.

Shiga Prefecture is a producer of Omi beef, one of the three most coveted brands together with Matsusaka beef and Kobe beef.

Suzuki ships five to six cattle a month after auctions. The sold animals weigh nearly 500 kilograms each after he has raised them for more than 30 months.

Demand for the breeds has been strong in recent years, mainly from restaurants in Tokyo and Osaka catering to foreign tourists.

But since the novel coronavirus spread in Japan, the top bids have dropped below 2,000 yen per kilogram. Suzuki said it is not rare nowadays to see the price ending up at about 1,500 yen.

Suzuki, 65, said his monthly earnings have plummeted by more than 1 million yen.

“The current situation is worse than the time when cattle farmers were ravaged by mad cow disease,” he said, referring to the bovine spongiform encephalopathy cases that hit the industry about 20 years ago.

The weighted average price for A4 ranked beef, the second best grade, was 2,476 yen per kilogram in March last year, according to the Tokyo Meat Market.

Other farmers who raise beef cattle after buying calves from breeders are also expecting earnings losses in the pandemic.

Including feed, it costs a farmer an average of 1.2 million yen to raise one calf.

If the price drops to below 2,000 yen per kilogram at the time of shipment, a single beef cattle, which typically weighs 500 kilograms, would sell for less than 1 million yen.

To ease the plight of cattle farmers, the government decided to provide subsidies of up to 50,000 yen per head if they meet the criteria for meat quality and feed.

The government also plans to shore up prices by promoting beef, including using it in school meals.

But Mitsuru Yamagata, a farmer who raises 140 beef cattle in Omihachiman, said he is not optimistic about the future of the cattle industry.

“Consumers will continue to shun luxury food until the Japanese economy is on the recovery track, even if the coronavirus pandemic is brought under control,” Yamagata, 50, said.

He called for long-term assistance from the government, saying a relief program intended to weather the immediate crisis would not be enough to sustain the industry in the long run.

The pandemic has also taken a toll on high-end fruits and seafood, such as lobster and abalone, that are often served at restaurants and ryokan inns accommodating tourists from abroad.

Transactions at the Osaka Municipal Wholesale Market in March showed the average price of melons grown in Shizuoka Prefecture dropped by 44 percent from a year earlier.

Strawberries harvested in Fukuoka Prefecture saw a decline of 17 percent.

The agriculture industry was also banking on hundreds of foreign technical trainees to work at farms this year.

As of April 1, about 1,200 Chinese and 200 Vietnamese who were supposed to start their training programs in farming could not show up because of the government’s restrictions on the entry of people from other parts of Asia.

Japanese officials said it is hard to predict when the interns will be able to enter Japan.

About 32,000 technical interns from overseas, mainly China and Vietnam, worked in the labor-intensive areas of farming, including harvesting fruits and vegetables as well as livestock and dairy farm duties, in Japan in 2019.