Film about piano that survived atomic bomb to premiere in July 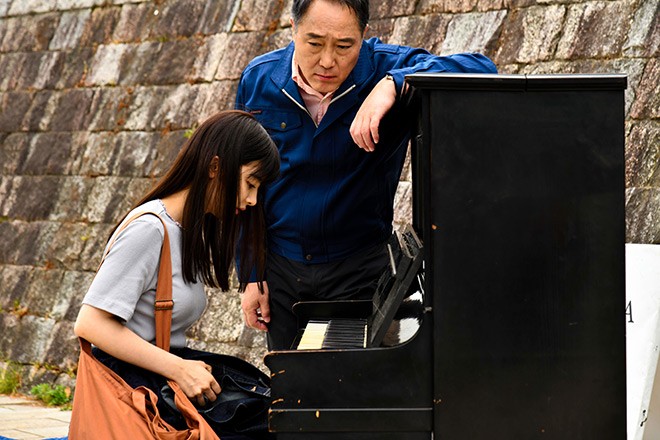 HIROSHIMA--A film exploring family values and the memories of the atomic bombing in World War II, with a plot hooked around a piano that survived the bombing, will premiere at a local theater in July, ahead of its nationwide release.

The story follows a young heroine, played by Tomu Muto of the all-girl idol group AKB48, who meets Yagawa, portrayed by actor Shiro Sano. Her interactions with him cause her to wonder about the meaning of the piano, the atomic bombing and the roots of her family.

Goto and Yagawa visited Hiroshima Mayor Kazumi Matsui at city hall on April 7 to discuss the film, following its completion.

"I hope many people will come to see the movie," Matsui said.

He alluded to how movie theaters are in dire straits due to the new coronavirus outbreak and restrictions on large gatherings and people going out.

"Hiroshima is a city whose culture has flourished from its burned-out ruins 75 years ago,” Goto said after the meeting. “I hope to explore what I can do to keep the light of culture alive while avoiding risks (posed by the coronavirus)."

The film is scheduled to open at the Hatchoza theater in the city's Naka Ward on July 17. The release date has been postponed from May 15 amid the pandemic.