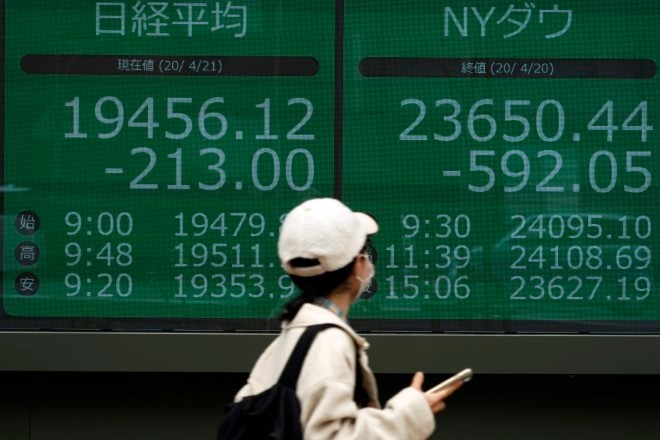 A woman wearing a mask walks past an electronic stock board showing Japan’s Nikkei 225 and New York Dow index at a securities firm in Tokyo on April 21. (AP Photo)

WASHINGTON/TOKYO--Asian share markets slipped to two-week lows on Wednesday as the floor fell out from under crude prices, exposing the deep economic damage wrought by the global coronavirus health crisis.

Skittish investors sought the safety of government debt as Brent oil futures plunged for a second day to a low last seen almost two decades ago, fueled by a swelling world crude glut.

The dizzying dive in oil has turned investors away from stocks and has given fresh urgency to bearish voices who are bracing for a catastrophic decline in asset prices as the COVID-19 pandemic wrecks the world economy.

Earlier this week, the May U.S. WTI futures contract crashed into negative territory for the first time in history. In addition to massive oversupply concerns, analysts say the plunge also highlights the technical constraints the market faces in responding to shocks.

“The negative price for May WTI futures was probably an anomaly, but it also was a symptom of bigger underlying issues that the industry must address,” said Arij van Berkel, who leads the energy research team at Lux Research in Amsterdam.

“Even though the oil industry theoretically has a diversified product portfolio, the current situation shows that its ability to switch between markets is extremely limited.”

International benchmark Brent futures dropped below $20 per barrel on Tuesday and last traded at $18.62, down 3.7 percent. So far this week, it has lost 33.7 percent.

On Wall Street, the S&P 500 lost 3.07 percent and the Nasdaq Composite, which has outperformed due to increased demand for various internet services amid lockdowns, dropped 3.48 percent.

“The plunge in oil prices sparked fresh caution about the stock market. Overnight, companies that have been seen as a winner in the post-corona world, such as Amazon, fell. That is a worrying sign,” said Naoya Oshikubo, senior manager of research at Sumitomo Mitsui Trust Asset Management.

The risk-averse mood offset news that the U.S. Senate on Tuesday unanimously approved $484 billion in fresh relief for the U.S. economy and hospitals hammered by the pandemic.

Governors of about half a dozen U.S. states pushed ahead on Tuesday with plans to partially reopen for business but some health officials warned doing so could trigger a new surge in coronavirus cases--fears shared by some investors.

As the difficulties of restarting the U.S. economy sank in, U.S. Treasury yields tumbled, with the five-year note hitting a new record low on rising prices for bonds: one of the safest assets.

The dollar rose to a two-week high against a basket of currencies, as investors fled riskier assets for the world’s most liquid currency while putting pressure on oil-linked currencies such as the Norwegian crown and the Canadian dollar.

The safe-haven yen held firm at 107.79 to the dollar while the Swiss franc stood near five-year high against the euro at 1.05255 franc.

The British pound nursed losses at $1.2287 after a 1 percent fall in the previous day also due to the lack of clarity on Brexit.

The top official at Britain’s foreign ministry said on Tuesday that he expected Prime Minister Boris Johnson to stick to the existing end of December deadline to reach a post-Brexit trade deal with the European Union despite disruptions caused by the pandemic.