Lifting state of emergency will be decided at the last minute 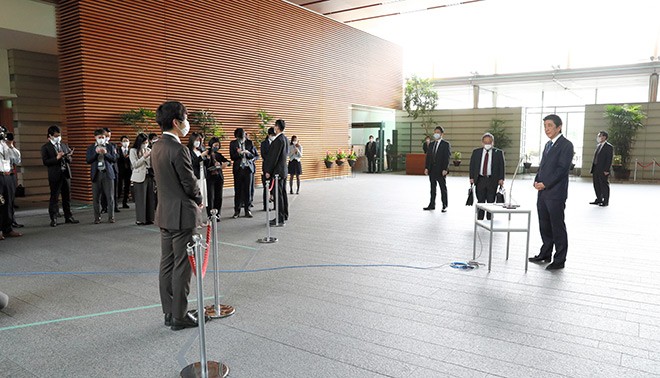 The government will wait until the last moment before deciding whether to lift the nation's state of emergency on May 6 and is certain that new coronavirus cases have peaked.

A state of emergency was first declared April 7 for Tokyo, Osaka and five other heavily populated prefectures, and expanded nationwide on April 16.

In issuing the April 7 declaration, Prime Minister Shinzo Abe set a target of reducing person-to-person contact by at least 70 percent, which he said would result in far fewer cases of infection.

“Two weeks later, a rise in new infections will hit a peak and the curve will go down after that,” Abe said at a news conference at the time. “We are calling on the public to refrain from going out through May 6 as we limit (the state of emergency period) to one month, including the time to review if measures are working.”

But after two weeks of the restrictions taking effect, it remains difficult to gauge whether Japan is winning the fight to bring the deadly virus under control.

On April 21, Abe renewed his call for the public to cooperate and stay at home to slow the spread of COVID-19, the pneumonia-like disease triggered by the virus.

“We want the public to further cooperate by cutting person-to-person contact by at least 70 percent and 80 percent, if possible,” he told reporters.

In the two weeks since Abe made that call, crowds at major railway hubs and shopping streets have significantly fallen.

For now, at least, Japan has managed to avoid an explosive growth in new infections.

But the country’s overall total of infections already exceeds 10,000. On April 20, 25 deaths were reported, a record for a single day.

A senior Abe administration official said the government is in no position to let down its guard yet.

“We cannot say that cases in Japan have already peaked,” the official said. “It may be difficult to end the state of emergency on schedule.”

For this reason, the government will decide whether to lift or extend the state of emergency after monitoring the trajectory of cases and the number of critically ill COVID-19 patients.

That means a decision will only be made at the last minute after reviewing all the indications, according to a ranking government official.

The official also said a partial lifting of the emergency will be possible for some regions if their cases are not at an alarming level.

There are worrying signs, though.

Even though crowds have vanished at large train stations and shopping areas in urban centers, other venues have been overwhelmed by people seeking a respite, raising concerns asymptomatic carriers may expose others to the virus.

Yasutoshi Nishimura, the economic revitalization minister who is in charge of containing the coronavirus outbreak, warned against such activity during a teleconference with prefectural governors on April 21.

“Parks, supermarkets and local shopping streets were packed with people on weekends, making the venues dangerous,” he said.

Health experts have urged operators to take steps to restrict or mange the entry of people to minimize the risks.

The government’s panel of experts on the health crisis is expected to discuss the issue at a meeting likely to be called on April 22.

(This article was written by Naoki Kikuchi and Ayako Nakada.)