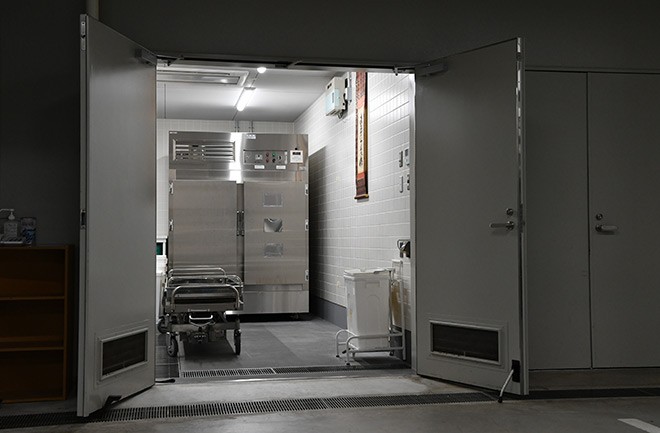 While hospitals are swept off their feet handling patients with the new coronavirus, cases are emerging of people dying from COVID-19 before being treated by a doctor or without even a diagnosis.

The National Police Agency said there were 11 such deaths since mid-March. The victims were all middle aged or elderly males.

Most of them were pronounced dead at hospitals after they collapsed at home.

Of the 11 cases, six occurred in Tokyo, two in Hyogo Prefecture, and one each in Saitama, Kanagawa and Mie prefectures, according to the NPA.

Doctors authorized diagnostic testing to determine whether the men were infected based on symptoms they displayed at the time they were taken to hospitals or accounts given by relatives.

The direct cause of death for some cases was not COVID-19.

Apart from homicide, police handle cases of death except for those that occur during treatment by a doctor.

The six men infected with the new coronavirus that Tokyo’s Metropolitan Police Department dealt with ranged in age from 55 to 85.

One man in his 60s was found lying in a street in the capital's Adachi Ward in the early hours of April 9.

He was taken to a hospital, where he was pronounced dead. His coronavirus infection was confirmed after his death.

A passer-by alerted police to the situation and multiple officers rushed to the scene to give the man a heart massage.

The officers are now self-isolating at home at the behest of the MPD in case they have contracted the virus.

In Saitama Prefecture, a man in his 70s was found collapsed at his home in Tokorozawa when a colleague from his workplace visited him on April 14.

The elderly man body tested positive for COVID-19 after his death. He had been absent from work due to a fever and other symptoms, according to colleagues.

Police don protective gear when they visit a scene with a dead body as a precaution against becoming infected if they could reach the person's relatives or doctor to ascertain whether the victim suffered from a persistent fever, coughing or other signs of COVID-19, a pneumonia-like disease.

But it is often difficult to get that sort of information in an emergency and when a person died without anybody around.

“We may be able to defend ourselves if we can find out from people who knew the dead person the circumstances leading up to their deaths,” a senior police official told The Asahi Shimbun. “But we cannot do so when people living alone die.”

In Hyogo Prefecture, forensic police wore protective gear when they examined two men who both died indoors, as there were indications they were infected.

Osaka prefectural police said no infections had been confirmed in cases where dead bodies turned up.

Still, officers wore protective gear when they collected a body found in a mountain area in the prefecture on April 21.

They did so because relatives who reported the seventysomething man's disappearance told police he had run a fever for several days before he went missing.

Osaka prefectural police make it a policy to wear protective gear if there is a witness account that a person who lived alone died after he or she was seen having difficulty walking.

The prefectural police said there were more than a dozen cases in which police examiners took precautions against the infection.