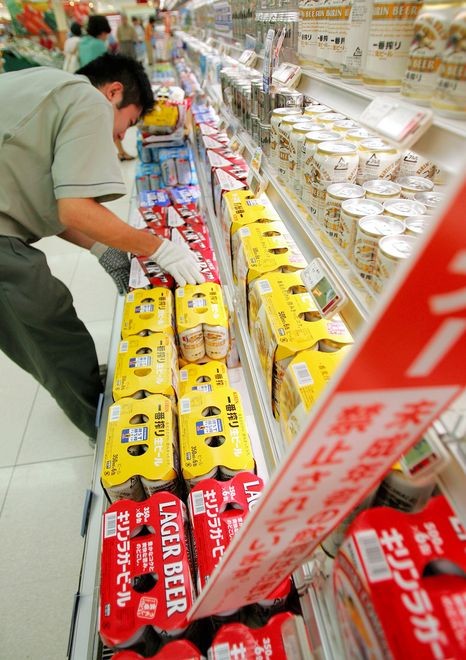 Health experts fear a rise in alcohol dependency among people stressed over their jobs and health while being stuck at home during the novel coronavirus pandemic.

Under government requests to stay home to prevent the spread of the virus, residents have found their lives turned upside down.

They are now refraining from venturing out for shopping or entertainment and are worried that a virus-related economic downturn could result in their unemployment.

A 34-year-old company employee in Yokohama who started working at home on April 4 succumbed to the temptation to knock back some alcoholic beverages to get through the day.

“The difference between days off and on-duty hours virtually disappeared after I began teleworking,” she said.

Before the outbreak, she drank only two or so cans of beer after returning home shortly after 9 p.m.

Now, she starts sipping alcohol from as early as 4 p.m. when she cooks. By the end of the day, she has often consumed five or more cans of beer and “chuhai” soda-mixed shochu.

She said she is stressed out thinking that she could lose her job or receive a pay cut as the economy worsens and the employment market shrinks.

“With this sense of unease, I want to stop contemplating the problems I now face in life,” she said. “That might be the reason why I have to gobble down four to five cans.”

According to major breweries, sales of beer and other beverages targeting restaurants and other businesses were lower in March than in the same period of the previous year.

However, demand for canned alcoholic drinks intended for household consumption has been rising. For example, sales of some imitation beer products with reduced sugar rose 2 to 3 percent in March year on year, the breweries said.

After the government declared a state of emergency for seven prefectures on April 7, social media sites were flooded with posts about drinking.

One post said, “The number of times I go out and meet with others has decreased, and only my alcoholic consumption and weight have increased.”

Another poster wrote, “I now drink five times a week although I previously consumed alcohol only once every two to three months.”

Tomoyuki Miyazaki, 38, a freelance writer in Tokyo who has been working at home for seven years, referred to his own bitter experience in trying to raise awareness of the issue.

“One should pay more careful attention on how to live with alcohol, now that life is undergoing a drastic change,” he said.

After becoming independent from a publication agency in April 2013, Miyazaki started accepting an increasing number of job offers for work at home. Soon, the border between work and private life was blurred.

“Alcohol eroded my life as if slicing it up,” Miyazaki recalled.

Although busy working at home, he occasionally had three days off a week, allowing him to begin drinking during the daytime.

He also sipped diluted liquor three hours before a meeting, and he put canned chuhai in his bag to drink outdoors after he finished an interview at an office.

Eventually, Miyazaki consumed so much alcohol that he lost consciousness every night. He was hospitalized for acute pancreatitis on two occasions by May 2016.

He went to a dedicated clinic for alcohol dependence for six months before recovering.

“New easy styles of drinking, such as via video conferences, are currently drawing attention, but those habits may end up making the situation worse,” Miyazaki said. “Drinkers should not believe such problems would never happen to them, and they should make efforts to keep their lifestyle normal by taking a stroll and keeping early hours.”

The World Health Organization in March released a statement on its website, urging caution against alcohol dependence.

The statement points out that people in self-isolation more easily resort to video games, gambling and mind-altering substances, such as drugs and alcohol, not only to ease stress and anxiety but to also kill time at home.

The Japanese Medical Society of Alcohol and Addiction Studies in April also called on the public to be wary of alcohol addiction.

“Japanese should be increasingly alarmed at the problem from now on,” said Susumu Higuchi, 65, director of the Kurihama Medical and Addiction Center.

Higuchi, who studies alcohol and video game addictions, said it is important to decide when and how to drink in advance.

“Drinking alone at home can lead to a faster pace of emptying glasses,” Higuchi said. “That results in a higher alcohol level in blood and causes damage to internal organs, so one should be careful to drink slowly.”

According to the health ministry, the “proper and exemplary amount of alcohol consumption” translates into 20 grams of pure alcohol per day on average. That volume of alcohol is comparable to a 500-milliliter can of beer or 180 milliliters of Japanese sake.

Men who drink 40 grams or more of alcohol a day and women who consume 20 grams or more daily are at higher risk of developing lifestyle-related diseases, studies have shown.

Higuchi also advised drinkers to go outdoors every morning to bathe in the sun because staying indoors could disrupt the biorhythm and cause insomnia, which could push people to rely on alcohol.

Higuchi is currently concerned that the likely deterioration in the economy during the pandemic will further increase alcoholism.

“The issue of alcohol dependence will emerge if people have to stay home for much longer periods and anxiety continues spreading about the economic situation,” he said. “Increases in the unemployment rate are said to be associated with alcohol dependence.

“The situation is tough now, but I would like people to communicate with others through the internet and take other countermeasures to keep their bodies and minds healthy and to stick to regular hours.”